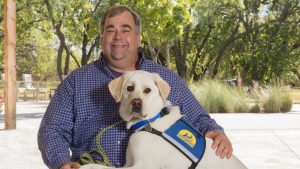 September is National Service Dog Month, a month to raise awareness, appreciation, and support for service dogs in the United States.

Edmond resident Lee Parker sustained a low spine and hip injury, which causes him to have limited mobility and pain. He applied for a service dog to receive help with practical everyday tasks so he could be more independent.

Lee received Service Dog Farley, a yellow Labrador/Golden Retriever cross, from Canine Companions for Independence. Lee spent two weeks at Canine Companions’ Southeast Regional Center in Irving, TX, completing an intense residential Team Training course where he was matched with Service Dog Farley. Farley has been professionally trained in over 40 commands and assists Lee by picking up dropped items, turning on and off lights, pushing buttons to open doors, opening and closing doors and drawers, and other tasks that will enable him to live a more independent life.

Though costs to breed, raise, train an assistance dog, and provide ongoing support to the team are estimated at $50,000, Canine Companions service dogs are provided free of charge to recipients.

“I never knew how wonderful a service dog could be, and change my altered life in such a positive way,” says Lee. “Farley and I became immediate friends while I was at Canine Companions and that bond has grown exponentially over the last year.”

“Farley stays right at my side with his full attention waiting to help me. He opens my lower drawers, turns my house light on/off, he is learning to assist me out of a chair and he retrieves my dropped items which is huge for me. Farley is a hit anywhere we go that people realize and understand he is a true service dog. What a companion I have, when I get in a crisis Farley has the most amazing deep bark that lets someone know I need help,” said Lee.