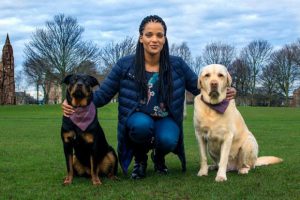 AN EDINBURGH dog walker has been forced to pay a business rival £3,000 in damages after accusing her of leaving pets locked inside a van on a hot day in a viral video.

Alana Mullen, who worked for Pilrig Paws, posted a clip on Facebook about Heather Hiram, who runs the Safe and Sound Hound dog walking service in the capital.

The video appeared to show dogs inside a van panting as temperatures outside reached 20C (68F).

Miss Mullen, 30, also claimed to have “caught and confronted” Miss Hiram, 41, and accused her of “not being able to control her dogs”.

The pair did not know each other but both walked pets in Pilrig Park.

Miss Hiram, a former solicitor, insisted her vehicle had air conditioning and cooling mats, had open windows, and demanded the ‘defamatory’ video be removed – but that request was ignored.

The clips, posted in June 2018, were shared more than 1,500 times, racked up 37,000 views and attracted scores of critical comments against Miss Hiram.

They showed Miss Mullen and a female friend confronting Miss Hiram with allegations that she left several of the dogs in her care in a hot van.

Miss Hiram launched a defamation action for £5,000 against Miss Mullen at Edinburgh Sheriff Court saying that she had been deliberately targeted and that the video led to a deterioration in her business by losing clients.

She told the court that she had spent £4,000 transforming her van and that it was the same system as used by the SSPCA and had also completed training on dog handling.

Miss Mullen argued that the statements in the video were true and could not be classed as defamatory.

But following a civil hearing, Sheriff Adrian Cottam ordered Miss Mullen to hand over £3,000 and also make a public apology to Miss Hiram.

In her apology, Miss Mullen said she had ‘jumped to certain conclusions’ when filming the video and hoped that criticism of Miss Hiram would now be ‘halted’.

She added: “I am writing this post to offer my sincere apologies to Safe and Sound Hound for the Facebook post I circulated about them which was widely shared on 26 June 2018.

“The voiceover suggested that the dogs had been in the van for around 20-30 mins on their own although the recording was less than two minutes long.

“The other videos show Heather giving dogs water and trying to explain what happened, I regret not letting Heather speak and moreover, I accept that I jumped to certain conclusions that day, which turned out to be wrong.

“When I wrote the post, I was unaware of the extent and level of Heather’s training and experience and I understand now she is as passionate about her own dogs as she is about the dogs in her care.

“I believe Heather to be a very professional dog walker and I am truly sorry for suggesting otherwise.

“All these comments were unsubstantiated and my hope is that by issuing this apology and clarifying the events of that day, people’s concerns and misunderstandings will be allayed and criticism will be halted.

“My hope is for everyone to leave the incident behind them and look forward to a positive future with, of course, the dogs’ best interests at heart.”

In a written ruling, Sheriff Cottam said: “Clearly the reputation of a dog walker would be lowered in the opinion of any right minded person reading it.

“In fact the comments posted showed the feeling of repulsion and rage against the pursuer and in effect proved even beyond doubt how the comments affected the view taken of the pursuer.

“The main issue was the risk posed to the dogs by being left in the van.

“Here I preferred the evidence of the pursuer with regard to the modifications made and the fact the adaptations took away the usual risk of dogs in hot cars.

“There was no reason to disbelieve the cost and care that went into the van and this evidence pretty much defeats the main thrust of the post that the dogs could have died.

“To post comments implying the risk of the temperature, and comments and video relating to the harm that could be caused is clearly defamatory if in fact the dogs had not been left in a situation where such risk arose.

“I am therefore satisfied that the pursuer has successfully pled her case and I find in her favour.”