Viral reports that US left service dogs in Afghanistan 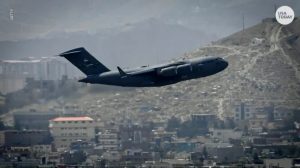 WASHINGTON – The Pentagon is disputing claims that it did not evacuate all dogs that worked with the United States during operations in Afghanistan after viral images and reports to the contrary.

In the closing days of America’s longest war, conservative activists, politicians and animal lovers raised alarms online that the U.S. was not evacuating its service dogs.

On Tuesday, the Pentagon denied that any dogs that had worked with the U.S. military were left behind in the country while acknowledging that a series of social media posts about nonmilitary evacuation of Kabul pets caused confusion.

“To correct erroneous reports, the US military did not leave any dogs in cages at Hamid Karzai International Airport, to include the reported ‘military working dogs,'” said Eric Pahon, a spokesman for the Defense Department.

In recent days, an animal welfare group on the ground has been working to evacuate animals on the ground in Kabul, including some dogs who were contracted with security services in Kabul, the group says. The Pentagon denied that these animals were ever in their care.

Animal evacuation efforts go viral
On Aug. 27, Kabul Small Animal Rescue, an animal welfare group that has tended to animals injured or displaced during the war in Afghanistan,posted on Twitter that it was trying to evacuate animals in the cargo hold of planes leaving Kabul’s airport.

The animals were being flown out as part of the group’s “Operation Hercules,” a crowdfunded effort in the country. That work had been going on days before the viral images began circulating.

An older social media post from the group described the animals as “dogs and cats left behind as people flee” in Kabul. It made no mention about the animals being service animals or contracted to work with the U.S. military.

KSAR, an affiliate of SPCA International, did not return requests for comment.

On Tuesday evening, SPCA International published an update stating that Charlotte Maxwell-Jones, the KSAR’s founder, had rescued at least 130 animals and had been working with U.S. forces to evacuate them from the country. That number included “46 working dogs and several personal pets belonging to fleeing Americans,” the group said.

On Sunday, an image posted to Twitter by the veterans organization Veteran Sheepdogs of America shows some animals in crates in front of a damaged military aircraft. The post says the aircraft is at Hamid Karzai International Airport.

And on Monday, the president and chief executive officer of American Humane, an animal welfare group, wrote an open letter criticizing the military for allegedly leaving behind animals that had worked with the U.S.

The crate image and others were shared online by pundits and lawmakers critical of the broader U.S. withdrawal.

Rep. Nicole Malliotakis, R-N.Y. tweeted a similar sentiment: “Really sad & heartless! The Biden Admin did not only abandon our citizens and Afghan partners. They abandoned dozens of service dogs too.”

Conservative activists further rallied around the fate of military animals, circulating images and memes and starting a hashtag on social media.

Pentagon: US military did not leave dogs in cages
The Defense Department, however, denies that any military service dogs or contracted animals were left behind in the country.

He noted the “priority mission was the evacuation of U.S. citizens, SIV and vulnerable Afghans,” not animals.

The Defense Department further cited “customs regulations” as a hurdle in evacuating the “stray dogs” from the country. The department did not deny the authenticity of the viral image but did contest that the animals had worked with the military in any capacity.

In its Tuesday statement, SPCA International said that Maxwell-Jones “was informed that most of the KSAR dogs had to be released into the airport on August 30 as the airport was evacuated – turning once rescued shelter dogs into homeless strays.”

The organization further claimed that “numerous private charter aircraft were not granted access to the airport.” The group did not know if the military had evacuated the dogs it says were contracted working dogs.

“Kabul Small Animal Rescue told us they had a contract plane coming, but that flight never showed up or contacted us. All our working dogs left with their handlers. We would not leave them behind. To suggest otherwise is ridiculous,” Pahon said in his statement.

The U.S. Centers for Disease Control and Prevention prohibits the travel of dogs from countries with a high incidence of rabies to the U.S. Afghanistan is among those countries.

The online torrent came after the military was criticized on social media for photos and videos that purportedly showed U.S. forces giving priority to evacuating service dogs over Afghan people fleeing the Taliban.

U.S. forces withdrew from the country in the early hours Tuesday, meeting President Joe Biden’s deadline for American forces to withdraw from the country. Secretary of State Antony Blinken estimated that at least 100 Americans in the country who wanted to leave were still there.

The Defense Department says it evacuated more than 124,000 people from Afghanistan, including about 6,000 Americans, calling it the largest airlift in U.S. history.