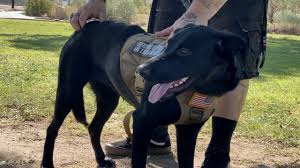 Non-profits and organizations have been struggling during the pandemic to give those in need the services they provide.

1 Veteran Foundation is no different — the foundation provides services to veterans who suffer from post-traumatic stress disorder (PTSD).

Veteran Affairs says eleven to 20 percent of veterans who served in either Operation Iraqi Freedom or Enduring Freedom, struggle with PTSD in a given year.

David Gardner is one of those veterans, but with the help of his service dog, he’s coping with the disorder.

“Since day one, she’s been my ride or die and she goes pretty much everywhere I do, unless I’m on a motorcycle,” he said.

Gardner served seven years in the Army and deployed to Iraq in 2006.

“I recognized I had PTSD — probably a good five-six years ago. But, you know, like being a father. I kind of put myself on the back burner on taking care of myself. And like I said it wasn’t until I met Brian, that this became the best option for me,” he said.

Gardner found 1 Veteran Foundation, the group gave him the opportunity to train his service dog to help him combat PTSD — through his motorcycle association.

Brian Latta, the Vice President of the foundation says since 2015 more than 20 veterans have been paired with dogs. However, like many organizations, donations are dropping and 1 Veterans Foundation has another seven vets on the waiting list.

When Mark Lacy, the founder of Southern Arizona Musicians for Healing, another PTSD organization, heard about the need he stepped up to help the cause. He raised thousands of dollars for Gardner.

As Garnder awaits his companion’s month away to undergo training, he shared his advice to other veterans who might find themselves in the same situation.

“I sat on it for five-six years before I even decided to do anything. The stigma is there but you got to worry about yourself. You got to take care of yourself first and foremost. Most military guys, we want to help people,” said Gardner. “If you’re going through some me definitely need to talk to somebody, reach out. I got lucky and he reached out to me.”