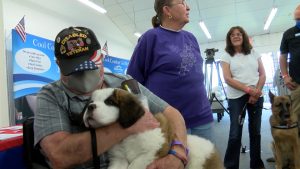 Veterans from across the country travel to Branson to celebrate veterans week, and now some of those heroes will return home with a new furry friend.

Frank Schlechta, a disabled veteran from Texas, made the trip this morning to meet his new Saint Bernard. “She’s just such a great puppy! She’s beautiful! Oh my God, she’s beautiful!”

Schlechta’s new service dog will be able to help stabilize him as he tries to walk.

“She’s going to be big enough to where when I start falling backwards, she’ll be able to keep me from hitting the deck, you know, hitting the ground.”

Sue Swanigan began Woof for Vets to help those who have sacrificed for their country. Veterans fill out an application for the type of dog they would like and what services they may need. Then Woof for Vets finds the dogs from local breeders, and they handle all of the medical and training expenses before delivering to their new companions.

“This one was a surprise. And so Frank knew he was getting a dog, but he didn’t know what kind. So, all of a sudden it was a surprise when we put it in his lap and that always makes you feel good in your heart.” said Swanigan.