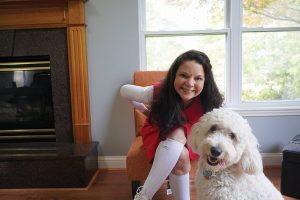 Today, the country honors the men and women who died while serving in the U.S. military. But for some veterans who returned home safely, their service meant sacrifices that continue to affect them in civilian life.

For local Marine Corps veteran Deanna Gehman, her service meant living her life with post-traumatic stress disorder, which debilitates her to the point where she can’t comfortably leave her home. Now, she finds solace in her husband, Mark, and new service dog, Cleopatra, and is on a journey to living a life without fear.

“You’ve just got to be vulnerable and tell your story because there’s so many people out there who think they’re alone.”

Gehman served in the Marine Corps from 1991-1997, and is considered a 100% disabled veteran. Her PTSD is caused by sexual military trauma.

Gehman noted pain from the military is sometimes not seen.

“It’s invisible, and the struggles that veterans have, it’s within ourselves,” she said. “It’s a battle every day. … Come to my room at 1 a.m. You have a good night’s sleep, don’t you? I don’t even know what that looks like. I haven’t been to sleep in 20 years.”

After just turning 22 years old, Gehman made the decision to join the military because she “wanted to be part of something bigger” than herself.

“This is 1991, so the first Gulf War is going on and I wanted to help my country,” she said. “I wanted to do more than myself, and it wasn’t about me. … It does take a different breed of person to be in the military, because it’s not a job you can quit. You can’t just say ‘I’m not going to work today’; you have no choice.”

Gehman said she “loved” the Marine Corps and that it has made her who she is today, but added that becoming a civilian is “tough.”

“To try to find where your niche is; I ended up teaching,” she said. “I became an algebra teacher. I like to give, I like to help people. … I only can work about 14 hours a week; I don’t leave the house. (Mark) does all the grocery shopping. I don’t like big crowds and stuff.”

Post-service, Gehman said it takes a “long time” for any veteran to admit that they have a disability.

“I remember when I got my tag, I still parked far away from the disabled … because I didn’t want anybody (saying) ‘She doesn’t look disabled.’ And I didn’t want that stigma,” she said.

“I went to Walmart one time about 10 years ago (and) I left all my groceries there, panicked, and we only lived a mile from Walmart, and (Mark) had to come and get me. It was excruciating. So finally in 2016 they were like ‘You need a service dog,’ and it took me until last year, finally, two and a half years later … we got her.”

Cleopatra is a 15-month-old white Golden Doodle, still in training.

Gehman describes her life as a “prison,” saying a service dog will help “a lot.”

“They’re not pets; they help,” she said. “I’m in a prison, but I don’t tell people that. I cannot leave my house, I cannot go to Walmart, I cannot do the things that I’d done before.”

She does, however, go out with her husband, Mark, but said that for the most part she is confined to her house without him or Cleo.

“And I’ve never thought, until just now,” Gehman said, “I know (Mark) loves me and I know that’s OK (to rely on him), but I want to do those things. I want that freedom, and that freedom for him to be able to have friends. (Cleo) will be able to be my wheelchair to someone who can’t walk. My eyes to people who can’t see.”

It took her over 20 years to say “OK, I’m not this tough marine, and I’m going to ask for help,” which is what prompted the pursuance of a service dog, Gehman said.

“I’m a prisoner within my own world,” she said. “And I want friends, I want to go to lunch. I just turned 51, and I want to help people. That’s what I do; I’m a helper, and I can’t do that if I’m here, and I graduate in a year and there’s so much more I can do. There’s so much more that I want to do with my life. I have so much more to live, and I’m limiting myself by not utilizing the tools out there for me, and (Cleo is) my ticket to gaining access out that door; walking out that door without fear and without the hypervigilant.”

Gehman is expected to graduate from Capella University in 2021 with a Doctorate in Adult Education and credits her bright future to her husband and Cleopatra.

“(Mark) saved me. … Going into the Marine Corps I gained confidence, leadership, tenacity and just was able to overcome challenges.”

Once she met her husband, Gehman said he had the ability to see through “all of that.”

“He started rebuilding that platform back to what I had before,” she said. “There was much he could do to get me where I need to be, and now Cleo can take me out of the house. … Cleo is a steppingstone; it’s a journey.”

Gehman said the “triggers” to her PTSD will always be there, but now she is able to “handle” them with Cleo beside her.