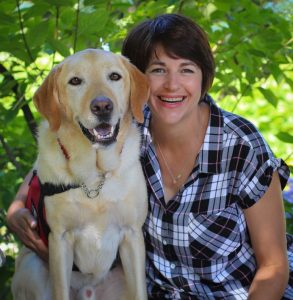 A local woman is trying to raise money to help people who can’t afford to get a service dog.

Jacqueline Gori is the director of Partners with Paws, an organization that helps provide individuals in need with a service dog.

Gori says she has first-hand knowledge on the importance of a service dog because her service dog Samson has saved her life multiple times.

“So when I have a PTSD flashback, he is trained to interrupt any harmful behaviours. He has literally knocked knives out of my hands, pills out of my hands. He has intervened in seven suicide attempts.”

She says her dog Samson can see a flashback coming 15 minutes in advance — and he has in the past also used that power to help strangers.

Gori says she’s raising money with her book of illustrations to help people who need a service dog but can’t afford it.

“It’s a book about 50 of these amazing labradors. Some of them are pets and some of them are service dogs. So it’s really our loveable friends being clowns and rascals, stealing things, not getting into boats.. or getting into the wrong boats. Just having fun!”