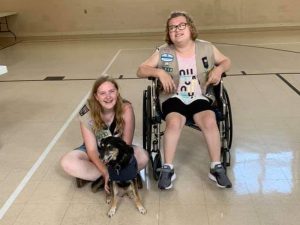 Girl Scouts Keaira Lutz and Katie Mericle, a junior and senior at Parkland High School, are moving forward with building North Whitehall Township’s first dog park and a nearby handicap-accessible playground, coronavirus or not. The two are pictured with Lutz’s dog, Buster.

It’s a dual project nearly three years in the making, and two Girl Scouts have their eye on the finish line: North Whitehall Township’s first dog park and a nearby handicap-accessible playground, coronavirus or not.

They reached a crucial turning point at a virtual meeting this week, where the board of supervisors awarded a bid to Semmel Excavating of Allentown for $119,303 to begin construction at Kolapechka Park, targeted for late May and finishing in late July.

“Does anyone in the audience have any comments?” a masked township Manager Christopher Garges asked a WebEx audience Monday night.

In the background on a microphone, a dog started barking.

“Somebody’s dog does,” a caller remarked.

Keaira Lutz and Katie Mericle, a junior and senior at Parkland High School, initially had two separate ideas for their Gold Award projects — the equivalent of the Eagle project in Boy Scouts — that they quickly realized would make sense together.

Lutz sees friends walking dogs along the roads of North Whitehall Township, not exactly a sidewalk community, and wanted to build something that could help them play safely. She has three dogs herself, and picked up a job at Colonial Kennel in Whitehall Township in the fall to try to better learn her future clientele.

Mericle, who has cerebral palsy, wanted to create a playground that kids like her could enjoy. She never really played on traditional playgrounds, the mulch being difficult to navigate in a wheelchair and traditional swings requiring too much balance.

“I wanted to make sure other kids younger than me don’t experience that, because you get left out,” she said.

The two have been friends since middle school. Once Lutz entered high school, they both started brainstorming these ideas, realizing they made the ideal pairing.

“Service dogs can have fun and play with other dogs while being close to their kids,” Lutz explained.

They brought design ideas to the township, whose engineer helped them craft blueprints for approval by the supervisors and parks and recreation board. The dog park design has two fenced areas, one for smaller and one for larger dogs, totaling about half an acre, with agility equipment, poop bag stands and watering stations.

There’s an existing playground at Kolapechka Park, but Mericle’s would constitute a separate section. For now, the design calls for a rubber foam ground and two double-oodle swings, where the child can be strapped in like on a roller coaster. She has a vision for nine other playground pieces to add to the project in future phases.

“These are probably the two biggest projects that I’ve seen,” Garges, the township manager, said of other Scout projects involving the township, which often consist of trail kiosks or fencing.

The Gold Award requires a minimum 80 hours of service, and traditionally must be completed by Sept. 30 of the year a Girl Scout graduates from high school. This project involves significant infrastructure costs that the Girl Scouts will help pay for through fundraisers and the township wants to supplement with grants, he said.

After excavation, surfacing and equipment purchases, the project is estimated to cost $180,442, he said. The troop has hosted a slew of fundraisers so far, including cookie sales, a dog social and a 5K at the park, and raised about $3,600 so far. They have more fundraisers planned that are on hold due to the coronavirus.

The rest will come from local donations, grants Garges applied for from the Chamber of Commerce and developers’ recreation fees from the North Valley Trade Center warehouse project that was approved in January.

“We picked up the ball and pulled everything together,” Garges said.

With the bid out, but construction at a halt due to a state shutdown of non-life-sustaining business, it’s a wait-and-see game for whether the groundbreaking can still happen in late May. The girls are assembling signage themselves and will get to help put some of their own equipment in, when the time comes. “It’s moving forward and that’s all we care about,” Mericle said.