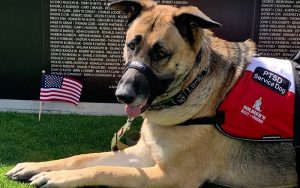 Students with emotional support or service animals have experienced difficulties finding housing contracts and other accommodations because of a lack of understanding for the roles their animals play.

A little over a year ago, 23-year-old commercial music major Michelle Howard said she found herself in need of some help, as starting college far from home brought out feelings she didn’t anticipate.

“I never thought of myself as a person with anxiety and stuff like that just because of the way I was raised, but growing up and going to college, I started realizing, ‘Oh, I do struggle with some of these things,’” Howard said.

Howard said she started exploring her options after her first emotional support animal, a husky, didn’t work out. Originally, she had brought her certified dog from home, but the dog didn’t adjust well. She had to rethink which animal would be the best fit for her busy schedule as a student.

Howard soon found Beanie the bunny, which motivated her to create a routine to benefit them both.

“With that routine, it helps me to be more centered and focused on what I do want to do. So instead of wasting a ton of time being sad, I get off my butt, help him, and then I can do the rest of my day,” Howard said.

The two soon faced another trial: finding accommodating, affordable housing in Provo. Howard ultimately moved to Orem for a year, where she found housing to be more accommodating, yet more expensive.

Those with service animals also experience difficulties. According to BYU’s Animals on Campus Policy, emotional support animals are not pets, do not require any specialized training, and are necessary to alleviate one’s symptoms through providing emotional support. A service animal is “a dog or miniature horse individually trained to do work or perform tasks for the benefit of an individual with a disability, including a physical, sensory, intellectual or other mental disability.”

Exercise science major Brooklyn Hafen has had her own challenges with her service dog, Mona.

Hafen said her managers and landlords didn’t initially understand Mona’s role was one of a service animal and not an emotional support animal. One of her roommates had childhood trauma from being attacked by a dog and was hesitant to live with a German Shepherd. Hafen said it took a lot of patience to sort out these areas of her life.

Many of Hafen’s classes have been accommodating, but small physical therapy facility she works at hasn’t been as understanding.

“I did train her to just stay in the office and never come out by the patients, but it wasn’t enough,” Hafen said. “They said that it ‘just wasn’t the environment for a dog.’”

Hafen said people are often not understanding of service animals for mental or emotional health and trauma. It usually takes listing her physical needs for her to be taken seriously, she said.

“I wonder whether people understand the purposes, training and/or services provided by either animal. That lack of understanding and the associated assumptions makes it hard for all concerned,” University Accessibility Center director Ed Martinelli said.

Whether it’s an emotional support animal or a service animal, Martinelli said BYU strives to help those in need with the proper accommodations.