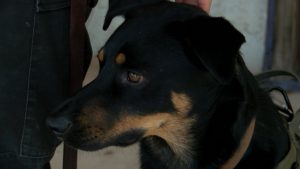 “Train a Dog Save a Warrior” (TADSAW) is a program to help military veterans dealing with mental and physical issues after missions. The non-profit matches veterans with shelter dogs who can then be trained as service dogs.

Jerry Eastman served 30 years in the U.S. military. Last October he was paired with his dog, Jack, through the “Train a Dog, Save a Warrior” program.

“It takes a veteran who has had a mental or medical issue and puts them with a rescue dog to help them both come back into society,” explained Eastman.

The program was started by Bart Sherwood in San Antonio, TX.

Eastman became a dog trainer for TADSAW after finding out the nearest trainers were in Brownwood and Abilene. He helps area veterans find a “battle buddy” and mentors them through training to make them a service dog.

The service is free of charge for military veterans. The non-profit provides the service dog, which comes from Concho Valley PAWS. Eastman gets to know the veteran, then finds a dog that would suit that veteran’s needs.

After the dogs learn basic commands like ‘sit,’ ‘down,’ and ‘stay,’ Eastman helps the veterans train the dogs to be out in public, go to stores, interact with other dogs, and serve the veterans’ needs.

“This way, the veteran decides ‘this is part of me.’ I’m not just training the dog and giving it to them,” continued Eastman.

According to Eastman, the dogs can help veterans cope after returning from missions.

“Take my dog, for example. He’ll jump onto my lap and start licking me, telling me ‘come back, come back to where you belong.’ It takes me from where I’ve been and brings me back to reality,” added Eastman.

So far Eastman has helped 5 veterans find their companions… and he’s hoping to help more.

“We’ve rescued both the veteran and dog when we pair them up,” said Eastman