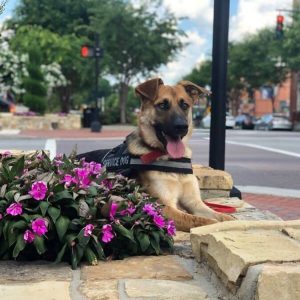 Two service dogs sponsored by SynergyLabs in Hildebran are available for adoption by local veterans.

The two service dogs, Alvin and Koda Bear are looking for forever homes with local veterans in need. SynergyLabs, a Florida-based pet product manufacturing company with a new facility in Hildebran, has announced that the two service dogs, which the company sponsored earlier this year, now are fully trained and ready for adoption.
Working together with Highland Canine Connect, a 501(c)(3) nonprofit organization based in Harmony that trained the animals, SynergyLabs funded the training with plans to donate both dogs to local veterans.
Koda Bear is 1 ½-year-old German Shepherd mix that was rescued from Henderson County Animal Services. Alvin is a 1-year-old Shepadoodle (a cross between a German Shepherd and a Standard Poodle) donated to the cause by Country Poos and Doos of North Carolina.

The playful pooches have been specially trained to work as service dogs to help their new handler with tasks such as fetching dropped items, opening cabinets, turning on lights and walking beside a wheelchair or walker.