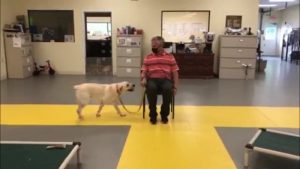 The COVID pandemic has been hard on everyone, including service dogs in training.

With no staff to train dogs with Educated Canines Assisting with Disabilities (ECAD) in Winsted, some volunteers â€” or home handlers â€” stepped in to help.

The home handlers took in 35 dogs that needed a place to stay.

â€śUsually, a home handler has an ECAD visitor for three days, a week at the most,â€ť Dale Picard, co-founder and executive director of ECAD, explained. â€śBut due to the lockdown and stay-at-home situation and the lack of kennel staff, these 35 volunteers kept the dogs for two months or more. They came, picked them up in March, knowing there would be no way to drop them off due to the stay-at-home order. This demonstrated an awe-inspiring commitment.â€ť

He said the months away did pose a negative effect on the actual hours of training each service dog is required to log before being placed at 18-24 months of age. However, he said they should catch up in no time.

â€śIâ€™m not too worried about those 35 coming up to speed in their training now that the dogs are on their regular schedule. Lu [Picard, who continued training the eight dogs that stayed with ECAD] will see to that they will be ready to be placed when the time comes.â€ť

Watch the video above for his full interview.