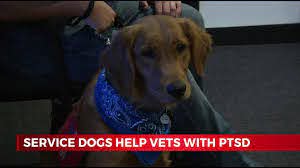 Six years after Warrior Freedom Service Dogs was established, the organization is expanding their one of a kind program that connects veterans to trained service dogs rescued from local animal shelters.

“The main goal is to reconnect these veterans who fought for us, when they come home, it’s our duty to take over and help them, you know, get reconnected back into society and it’s not an easy task for them. So to just shine the light on that, partner with a dog that we work through local shelters so they become service dogs – so it’s like a repurpose for them too,” says Keith.

Training Director Julie Jones-Thorton says that the service dogs are uniquely equipped to handle veterans struggling with PTSD. Aside from offering comfort, they can even sense when their cortisol levels are rising, and can alert them when they need to take action to reduce their stress.

“The dog gives them the confidence to be able to go outside their home, to go to the grocery store, to go to their doctor’s appointments, the chiropractor – we have one that goes and sits while he does his martial arts class. They also provide tasks out for those veterans, they provide space. They actually learn to indicate when cortisol levels are rising,” says Jones-Thorton.

The Warrior Freedom Dogs are hoping to raise awareness about their mission to connect veterans suffering with PTSD with a service dog, free of charge.

Their program already has ten graduates and eleven dogs have been rescued.