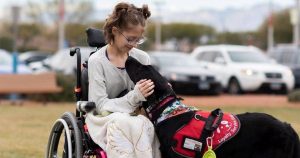 Four years ago, my daughter developed a rare condition known as autoimmune encephalitis, or “AE” for short. Any time she gets sick, rather than making antibodies that fight infection, her body makes antibodies that attack her brain. Doctors have described it as “her brain on fire.” It’s as cruel and debilitating as it sounds. She’s seized to the point of lifelessness more times than I can count, is reliant on a feeding tube for nutrition and frequently finds herself unable to walk or talk. Yet, still she smiles. Her condition doesn’t have a cure, but its symptoms are controlled with fistfuls of pills, and regular chemo and blood product infusions. Time and time again I’ve pleaded with the universe for a break. I’ve begged and bartered with every higher power you can name. But it was in vain. I couldn’t change what her body was doing. Then, in December of 2018 I got an email that two donors were willing to pay the balance of a service dog for her in full. They gave her the news Christmas morning and from that day forward I saw life in her eyes.

In early 2019, Gracie was presented with profiles of two pups. And after reviewing both with tears in her eyes, she declared of one, “that’s my Auggie.” And from that moment forward their hearts belonged to one another. Auggie had a lot to learn before she could come home. It wasn’t just commands like “sit and stay,” or her “service task” of seizure alert, but also how to behave in public. There are high expectations on a dog who accompanies their person everywhere, and it’s time consuming to teach them. Gracie kept in touch with Auggie through FaceTime, care packages, and letters, and the two met for the first time a year later, in January. Their bond was instant. Auggie knew Gracie was her girl, and Gracie knew Auggie was the friend she’d waited forever for. They had just 24 hours together, but you would have thought they shared a lifetime. Auggie looked at Gracie with stars in her eyes, and Gracie at Auggie as if she’d hung the moon. Auggie dutifully alerted to seizures, Gracie was generous with the snuggles and while the world spun around them, they were only in tune to each other. The goodbye at the end of their visit was hard but the hope we both walked away with having seen and experienced their connection made it worth it.

In spring, Gracie’s health crashed. At 13 years old she was just 57 pounds. Her heart rate was low and her liver and thyroid function below expectation. Her body was tired, and seemingly trying to give up. A feeding tube went in. Life was sustained, but its quality was poor. Gracie had fought long and hard, and simply had no more to give. The outlook was bleak. Then, Auggie came home. Auggie brought joy, inspiration and purpose. She brought out the best in Gracie, just by being near her. Gracie fought hard to speak clearly so Auggie could understand her. But when she couldn’t, Auggie never strayed from task. For her girl she’d do anything. When Gracie’s muscles hurt, she didn’t resign herself to a wheelchair. She used it when she needed to and doubled down on physical therapy to strengthen them again, knowing her girl needed her. She cried with pain as she stood up to play fetch, but she pushed through it, with renewed purpose. And with that purpose every day she grew a little stronger.

Her seizures didn’t stop, but they became less debilitating. Most times Auggie can tell her before they occur, allowing her to get to a safe space, minimizing the ways they hurt her. When they’re triggered and Auggie can’t alert before, she is able to get someone who can help. This shortens the duration of the seizures and has done wonders for recovery. But, probably the most amazing thing in this regard is that Auggie’s training has changed Gracie’s comfort level, giving her confidence to do more things independently.

Today Gracie is twice the size she was in March. Her body and mind are stronger, and her will dramatically different. Auggie has given her a second chance at life. Together they set goals that she once saw as unattainable, and collectively they crush them. Gracie, a girl who was once told she would never read again, is now an honor roll student and she and Auggie are co-owners of an Etsy shop, and budding philanthropists with their profits.

Auggie hasn’t given Gracie forever, but she’s made the forever she has worthwhile.