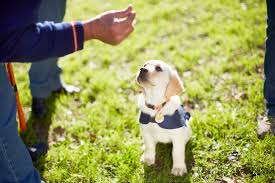 Do you love dogs and want to do a bit of good for the world at the same time? Now’s your time to shine.

Southeastern Guide Dogs a non-profit organization that trains dogs to assist veterans and those with disabilities, is looking for a few willing volunteers to raise puppies for 12-18 months.

Here’s how it works: The organization gives you a puppy to take home with you, which you will love and raise over the next year. All you need to do is “provide a loving base where the puppy can learn good house manners and basic obedience,” the organization notes.

That’s it. Seriously. The organization will do the rest.

The organization explains on its site, for any volunteer puppy raisers living near one of their groups in Florida, Georgia, Mississippi, Alabama, North Carolina, Texas, and Tennessee, it will  “surround you with a supportive team and teach you how to raise a future guide or service dog.” The local groups meet twice a month.

But, for those outside the areas, you’ll meet virtually with a Southeastern Guide Dogs regional manager using Zoom for one-on-one learning sessions, whenever works best for you.

When the time is up, volunteers will have to give the puppies back, but they will do so with the knowledge that those dogs will go on to get the in-depth training they need to become a certified service or therapy dog, and then go on to help someone who truly needs them.

To qualify to become a volunteer puppy raiser, you must be 18 years old, be able to financially support a puppy (the organization takes care of vet bills but you take care of the rest), be able to travel to Florida to pick up the pup, have a safe home environment, and be able to take the dog everywhere with you over the next year. Oh, and be willing to give plenty of belly rubs.