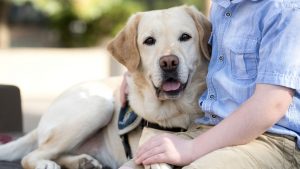 Talking to police or giving testimony at a courthouse, can be a scary experience for many.

Since 2014, service dogs have been allowed in the courtroom to provide emotional support for those in need.

For Emery Baert, having Madison with her made a huge difference.

“If she wasn’t there, to this day, I wouldn’t know the strength I have now,” Baert told CTV News in an interview. “She helped me stay strong. She was there when I felt like I couldn’t do it.”

Madison is from Dogs With Wings, a Calgary-based organization that breeds, raises and trains yellow and black Labradors to be used as service dogs. She’s helped hundreds of Lethbridge Victim Services clients in her five-year career.

Sarah Selnes suffers from post-traumatic stress disorder and felt anxious and sick every time she had to go into a courtroom. She said having Madison with her was the only way she got through giving some difficult testimony.

“Going into the courts was very emotional and was she able to go right in and on the stand and she was there for me.”

However, Madison’s career is now coming to an end. Those who work with her say she takes on secondary stress and is aging a little harder than normal dogs would.

They brought in her replacement, Marlee, in March. Although, there’s no retirement date set, the two will work alongside each other until Marlee is ready to take over full-time.

“We call her ‘mama dog’,” said Lindsey Gehring with Lethbridge Victim Services about Madison. “She’s such a good mom and nurturer with dogs and people and she’s immediately become that amazing big sister to Marlee. She just took her right in and is teaching her the ropes.”

While volunteers are sad to see Madison retire, they’re excited for Marlee to start helping people.

As well as training together, the two have teamed up for a calendar fundraiser. Since the dog program is 100 per cent privately funded, all of the proceeds will go towards paying vet bills and purchasing things like leashes, collars and dog food.

Gehring said what these dogs do matters and they want to ensure the program continues to be successful for the long-term.

“It’s so amazing to see what they can do and how they can really ground somehow.”