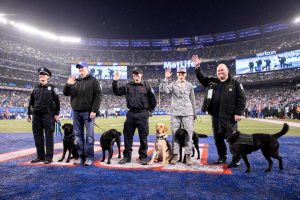 Puppies Behind Bars (PBB) founder and president, Gloria Gilbert Stoga, created a program that trains prison inmates to raise service dogs for wounded war veterans and first responders. Additionally, the organization trains dogs to become explosive-detection canines for law enforcement. Today, PBB operates throughout six correctional facilities in New York and New Jersey and has raised more than 1,200 dogs. PBB has earned its thirteenth consecutive 4-star rating from Charity Navigator, which indicates that the organization adheres to good governance and other best practices.

When Stoga first opened her organization over 20-years ago, she decided to breed her own Labrador retriever puppies. That decision came from wanting to provide canines that had the best genetic backgrounds and temperaments. All of the dogs enter the program at eight weeks old. Due to the high standards of the program, if a dog is released for either behavioral or physical reasons, the dog is put up for adoption. The explosive detection canine puppies are placed into a one-year program, while the service dog puppies participate in a two-year program.

“They live in the cells with the inmates,” Stoga explains. “The inmates are fully responsible for all of the training, the nurturing, the basic medical, the grooming, and once a week PBB staff goes into each prison for a full day of teaching classes and helps solve problems.” Before starting PBB in 1997, Stoga served as a member of New York City Mayor Rudy Giuliani’s Youth Empowerment Commission, whose mission was to secure private-sector summer employment for New York City’s underprivileged youth. She was responsible for developing and securing corporate commitments to provide training and jobs under the Commission’s initiative. Working for non-profits allowed Stoga to figure out how she wanted to operate her organization when it came time. The initial spark that inspired her to start PBB came after reading an article about Dr. Thomas Lane, a veterinarian running a prison guide-dog program in Gainesville, Florida. She subsequently had the privilege of visiting Dr. Lane and spoke with inmates and program staff in three prisons that hosted his program.

Six months later, she quit her job and approached Libby Pataki, who was then the First Lady of New York State. She immediately garnered Pataki’s support to provide education and rehabilitation for prison inmates and provide excellent quality working dogs for the public. Late 1997, she started her program with five Labrador retriever puppies at the Bedford Hills Correctional Facility, New York State’s only maximum-security prison for women.

In the beginning, Stoga and her team faced challenges with the unions and was not welcomed at her second prison opening, a men’s medium-security prison. “I wasn’t welcomed by security staff,” she shares. “To show them that I wasn’t just a well-meaning lady from New York City who was coming upstate to say, ‘you should give these inmates something positive to do,’ I went into that prison every single day, Monday through Friday for six weeks. I’d run to the women’s prison for half a day, three days a week, and I’d come back. For six weeks, I more or less lived in that prison…Very slowly, I start talking to some of the corrections officers. I’d always bring my two dogs in, and they’d see how well behaved they were, how friendly they were. I got across to people that I was serious, that the dogs were of high quality and that I wasn’t going anywhere.”

PBB has become a goal for prison inmates. Although the program is volunteer-based on top of the inmates’ mandatory prison job, it does not accept everyone. Stoga does not interview sex offenders, anybody with direct child abuse or animal abuse or anyone with a high mental health issue. Additionally, the inmates have to be ticket free for 12-months meaning that they haven’t received any form of disciplinary action in a year. Having something to strive for keeps the inmates focused on the goal.

“You see people [inmates] change literally before your eyes,” Stoga smiles. “The other end of the spectrum is our [canine] recipients. We work with veterans. We also work with first responders, and to hear from our recipients and their families that they cut way back on their meds, or maybe they’re now med free, that they now go out in public or that they now engage with their families is incredible.”

As Stoga continues to grow the organization, she focuses on the following essential steps:

Clearly define your purpose and what you want to do. If you start to veer away from that, you will stretch yourself thin mentally, emotionally and financially, which will not lead to long-term success.

Don’t be afraid to ask for help. Being honest when you don’t know something will garner better results than faking your way through; it may hurt you in the long run.

Be prepared to work hard, especially when pivoting. You will work harder than you ever have before. You have to give it your all if you want to achieve your goal.

“When I first started working in prisons,” Stoga concludes, “I was totally completely black and white. There were good guys in the world and there were bad guys. That was that. Very soon on, the inmates taught me there’s gray; that people can do bad things, but they’re not necessarily bad people forever. There are some bad people forever; I’m not naïve. However, some people are gray.”