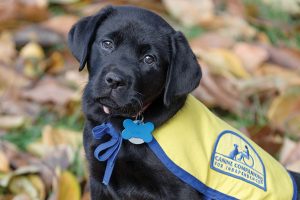 In 1962 when Marybeth Hearn was 10 years old, she convinced her parents to let her volunteer to raise a puppy for the California-based nonprofit Guide Dogs for the Blind. She wasn’t sure what to expect when they brought home a black Labrador Retriever named Lepta, but she knew one thing for certain.

“I do remember my dad constantly reminding me that the puppy wasn’t mine and that we just had temporary custody of it,” she says. “You know from the beginning that you’re not going to be able to keep that puppy, that they’ve got another purpose in life.”

Though it was hard to relinquish Lepta when it was time for her advanced training, Hearn had found her life’s passion. She’s currently raising a yellow Labrador Retriever named Barley—the 55th dog she’s raised for Guide Dogs for the Blind.

Needless to say, she now knows exactly what to expect.

“You take that goofy little puppy when they’re about 8 weeks of age and keep them about 14 to 16 months usually,” she says. “Then you see them graduate and become somebody’s eyes. It’s just absolutely amazing.”

So what does it take to raise a successful guide dog from puppyhood to graduation?

The first step is, of course, getting the dog—either picking it up in person from the organization’s headquarters in San Rafael, California, or gathering with other puppy raisers to meet a “puppy truck” that drops off pups at a predetermined location. Puppy raisers don’t know the name of the puppy they’ll raise, just the first letter of the dogs in the litter and the breed—typically a Labrador Retriever or Golden Retriever.

“There’s always a lot of guessing that goes on before we get them of what the name might possibly be, which is kind of cool,” she says with a laugh. “It’s a little game that all puppy raisers play.”

Meeting a new puppy is joyful and involves a lot of cuddles to promote bonding, particularly in the first two weeks together. They often cry while spending the first night away from their litter, so the raisers help them through it.

Training starts immediately. Raisers teach the pups their names and the word nice, which they say whenever the dog presents good behavior.

For instance, when Barley lies quietly on the floor chewing a toy—instead of, say, the couch—Hearn will say nice and reward him with a piece of his kibble.

“I have little Dixie cups of food all over the house,” she says. “So when I catch him being good, I’m marking that behavior. I’m encouraging him to be good.”

It’s critically important for guide dogs to be well-behaved at home, rather than jumping on furniture, snagging remote controls, getting into garbage, zooming from room to room, or barking when the doorbell rings.

To establish good practices, Hearn will ask her granddaughter to ring the doorbell while she waits with Barley inside, quickly treating the pup when he doesn’t bark.

It’s also imperative that puppies learn a “relieving protocol”—being able to go to the bathroom on leash, on a variety of surfaces, on command, and without accidents in between.

“We teach them to relieve on all sorts of different surfaces, not just grass, because as a working guide, they may not have grass available,” she says. “So I always start my puppies out on asphalt or concrete, and that means getting them out at two o’clock in the morning, putting them on the leash, taking them out, and rewarding them when they’ve done their business.”

Hearn meets with her local puppy-raising group weekly and will puppysit or trade dogs with other handlers to expose the canines to spending time with different people in diverse situations.

As the puppy’s confidence grows, Hearn teaches him basic cues like sit, stay, down, and come, and gradually builds upon socialization. For example, Hearn will start by taking a puppy to sit outside a big box store, feeding treats as people walk by. When ready, they’ll pop in and out of the store before taking longer shopping trips. The same goes for a restaurant: On a first visit, Hearn will ask Barley to settle under the table, then just drink an iced tea instead of lingering over a meal.

When a puppy is 5 or 6 months old, she takes him to church. They’ll sit in the back pew and if the dog is quiet, she’ll slip him treats periodically. Around 7 to 9 months—when there’s no risk of an accident—they’ll try a grocery store. Along the way, they’ll stay in a hotel, watch a movie, ride the train, visit bustling Christmas-tree lots, and attend holiday concerts. She’ll even attend pep rallies—seated near the door so she can quickly exit if the dog seems uncomfortable.

“It’s a building block: If a dog is successful at one step, then you add to it,” she says. “We do not know what the lifestyle of their future partner may be. So the more varied experiences I can give a puppy, the better their chances are of being successful.”

Hearn, a teacher at Lemoore High School, also brings her puppies to school with her. They proved so popular that she created a Future Farmers of America program at the school so that students can raise guide dogs as a recognized project.

Hearn and her students have raised 186 puppies for Guide Dogs for the Blind, including Ale, a black Labrador Retriever who partnered with San Francisco resident Mary Cruz in 2017.

“Ale is the most laid-back, wonderful, sweet dog you’d ever want to know,” she says. “He walks at my pace. He is not in a rush. It’s like we’re out for a Sunday stroll.”

Ale’s controlled pace has been life-changing for Cruz. Over 10 years ago when she and her daughter were in a crosswalk—without her second guide dog—an elderly woman plowed into them with her car, breaking both of Cruz’s legs and permanently affecting her gait. Her dog, Greeley, adjusted to her slower pace because of their close connection, but when the Golden Retriever needed to retire, she feared she wouldn’t find a guide dog who could walk as slowly as she needed.

As luck would have it, Ale almost couldn’t find a partner because of his own slow pace. Cruz says he helps keep her safe in crosswalks and from falling off curbs or running into poles. She’s grateful to puppy raisers like Hearn and her student, Jordan Lee, who raised Ale.

“As far as I’m concerned, all the puppy raisers are God’s gift to the world,” she says.

There are many opportunities to volunteer as a puppy raiser. For instance, around 2,000 people volunteer for Guide Dogs for the Blind—which, thanks to their help, partners dogs with their handlers for free.

On the East Coast, the renowned guide-dog school The Seeing Eye  has had a puppy-raising program since 1942, and nonprofits throughout the country depend on volunteers to raise future service dogs for a variety of roles, such as assisting the deaf, detecting impending seizures or blood sugar fluctuations in people with diabetes, mobility assistance, and support for those with PTSD or autism.

Canine Companions for Independence, a nonprofit that places service dogs for people with disabilities free of charge, has over 1,500 volunteer puppy raisers in the United States. Ohio resident Jerry Amos and his wife, Jerri, have raised puppies for the organization for nearly 30 years.

They enjoy welcoming pups into their home—which includes Hugo, their beloved Coton de Tulear —and helping socialize the dogs. They take them to local festivals and to meet veterans with PTSD for win-win socialization.

While they say it’s hard returning a puppy for their advanced training, it’s worth it for the best part: an emotional graduation ceremony, in which they hand over the leash of the dog they raised to a person with a disability.

The couple has presented dogs to many people, including a boy with autism, a young man with cerebral palsy, and a nurse injured in a motorcycle accident.

“It’s just a joy to do it,” Jerry Amos says. “A lot of our dogs are going to children. You see their eyes and how happy they are and what a difference it makes to them. To me, that’s what it’s all about.”

Puppy raisers are also critical to smaller organizations like the nonprofit Good Dog ! Autism Companions, which raises service dogs for children with autism. The dogs provide calming pressure when a child becomes overstimulated and act as a social bridge to other kids.

The organization currently has about a dozen puppy raisers and is expanding the program in order to serve more families, according to Laura Sylvester, co-founder and executive director.

“Puppy raisers are an essential part of our organization. They make things happen,” she says. “My favorite quote is, ‘Inside every service dog is the heart of a puppy raiser.’ ”