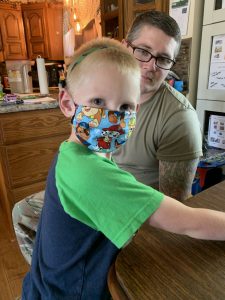 The Roy family of a 5-year-old boy with a rare condition is trying to raise enough money to help get him a service animal, a dog who could help save his life.

While pregnant, Jace Ross’ mom contracted a virus called the cytomegalovirus (CMV). The doctors did not know there was anything wrong Jace until he was born, but CMV was attacking Jace’s brain.

Jace was born profoundly deaf, and tests showed calcifications on his brain and hydrocephalus. Jace now has cochlear implants and can hear great with those, but he was recently diagnosed with autism, which is causing many difficulties for him and his family.

Jace’s autism and a high level of sensory needs cause him to bolt at times so family applied to get a service dog who can track him if he runs off. The dog is necessary to help save his life and will be trained in tethering and behavior disruption as well as be a furry friend to Jace since many children aren’t sure how to interact with him.

The family has chosen 4 Paws for Ability, the first agency, and still the largest, to train search and rescue dogs for children with autism. It costs 4 Paws between $40,000-$60,000 to raise and place a task-trained service dog and the family is working on raising $17,000 to assist with the cost.