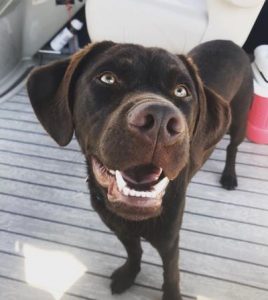 Stimpy crawls under a table outside of Eastway Hall, pawing gently at an orange peel a few feet away on the grass. The peel is out of reach. Mission failed. Lindsey Czopek, Stimpy’s owner, laughs.

For the past 11 months, Stimpy, a one-year-old chocolate lab, and Czopek have been almost inseparable. The pair are a part of Freedom Paws, a nonprofit organization at Kent State dedicated to training puppies to become service dogs.

“I’ve taught him literally everything he knows, including his name,” Czopek said.

Czopek, a junior zoology major, is the president of Freedom Paws at Kent. She’s had Stimpy since he was eight weeks old and has been training him every step of the way.

“The best time to train them (the dogs) is definitely (when they are) zero to six months (old). They’re like kids; they’re like a sponge,” Czopek said. “You can teach them everything at that age and they just know it.”

Freedom Paws puts a focus on preparing its service dogs in training [SDIT] to handle any situation with confidence and obedience. In order to teach this to Stimpy, Czopek had to get creative.

“Literally, from eight to 16 weeks, I was taking him to stores, I was banging on pots and pans, I was falling down the stairs … anything he could possibly see in his life, I was trying to mimic,” she said. “Because if they don’t see it in that time, they’ll be afraid of it.”

Eventually, Stimpy will learn more than 50 commands, but for now he’s practicing basic dog commands used in everyday life, Czopek said. These include commands like sit, down and leave it.

“In his later life, he’ll know so many,” Czopek said. “He’ll know how to hit a handicap button, how to pick up keys, but we can’t teach them that, because if we do it wrong then their future person is going to have to redo it.”

Stimpy is currently in the first phase of his training process to become a service dog. Everyday, he and Czopek are working toward the goal of achieving phase two, advanced training, and eventually phase three, which is working as a service dog full-time.

Czopek explained that most of the puppies in the program won’t graduate from phase one until they’re at least a year old.

In advanced training, Stimpy will be assessed to determine what type of service dog he’ll become upon graduating the program.

“We kind of specialize a dog based on what they’re good at,” Czopek said.

Czopek predicts Stimpy will be a diabetic alert dog.  “I only say that because diabetic alert dogs are trained to detect high or low blood sugar,” she said. “That’s through scent training and he has the best nose of any dog I’ve ever known.”

Once the dogs pass advanced training, they are matched with a person accordingly.

“We’re not trying to change their personalities,” Czopek said. “We just want them to have something to work for.”

For a while, coronavirus added some unexpected challenges in raising a service dog. In March, when Kent State moved to remote learning forcing some students to return home, Czopek brought Stimpy with her.

Czopek said the first two weeks back home allowed her to have a more personalized, constant training experience with Stimpy.

“Then, quarantine came,” Czopek said. “He was obsessed. If I left the room, he would lose his marbles … He’d start screeching … I realized we had spent so much time together … he needed me to be OK.”

Though this was only a matter of circumstance, Czopek understood that Stimpy needed to be able to socialize with other people besides her and her family.

“The coronavirus made it really hard for these guys, because for practically three months they couldn’t be in public,” Czopek said. “I wasn’t going to the store. I wasn’t going anywhere and neither was he.”

Besides being around other people, one important part of training an SDIT is to make sure they’re able to be around other dogs.

At Kent State, Stimpy is one of seven puppies in the Freedom Paws program. He interacts with the others quite often.

Sometimes, the dogs will get to play at the dog friendly park on campus. This gives the raisers a chance to spend time with one another, as well.

“It’s nice to have a group of people who understand,” Czopek said. “We all go through the same struggles, successes and everything.”

Although it might not always be easy, Czopek admits that she’s formed a strong bond with Stimpy, as well as with her previous SDIT, Georgia.

“It’s not all cute puppies and everything,” she said. “I promise you, they have their bad days, but the good outweighs the bad.”

Czopek said in the 11 months of raising Stimpy so far, one of her favorite parts has been watching him learn.

Czopek and Stimpy will part ways in the coming winter months, but she hopes that his future person will reach out by sending occasional pictures and updates.

“You’re heartbroken when they leave,” she said. “But, you would never not do it again, you know?”

In the future, Czopek hopes to eventually raise another service dog. As a junior looking for internships, she might hold off for the time being due to her busy schedule, but her love of dogs remains strong.

“As much as I’ve changed their lives, they have been such a life changer for me,” Czopek said. “They are my little best friends.”