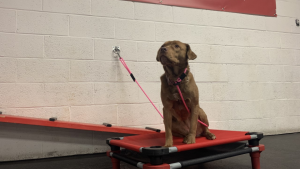 Those days of taking peacocks and pot-belly pigs as service animals on airplanes are over according to the Department of Transportation.

Tony Stokes trains dogs everyday, one wagging tail at a time. They sit, jump and come.

“Dogs can be very easy to train because they are constantly seeking reward, just like we are,” said Tony Stokes, Training Director, Lead Your K9.

This is one of the reasons why the Department of Transportation released this 122 page document, highlighting its final rules on what they consider a service animal.

It says: “this final rules defines a service animal as a dog, regardless of breed or type, that is individually trained to do work of perform tasks for the benefit of a qualified individual with a disability.”

“They can be comforting, they can be a nice companion, they can be very nice and enjoyable for outdoor activities and they can also be good family pets,” said Stokes.

He says at the end of the day, they are called man’s best friend for a reason.

There is a loophole though. The new ruling states airlines can recognize emotional support animals as pets and they can even put a limit on service animals.