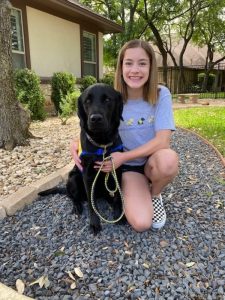 Mia Federico was on her way to eat waffles in the kitchen of her Georgetown home when her mom, Ellen, approached her with an idea: Would she like to train a puppy to become a service animal?

Ellen said she saw the ad online and immediately thought of her dog-loving daughter.

Then 13, 14-year-old Mia did some research and was immediately on board. She would receive a puppy, and through about 18 months, she would care for it and train it so that it will one day be donated as a service animal for another in need.

It was not long until they met Mochi, a black Labrador-golden retriever mix, on Sept. 27, 2019.

“I love training him,” Mia said of the experience so far. “He’s such a sweetie, and he’s a really good dog.”

The Federicos are volunteering through Canine Companions for Independence. Ellen said they liked the organization the best because it offers the trained dogs for free to an individual with disabilities in order to enhance their life—a gift that could easily cost $10,000-$15,000 through other organizations, Ellen said.

Each day, Mia cares for Mochi by brushing his teeth and grooming him. She also conducts two training sessions—about 30 minutes each—a day, she said. Mia is also responsible for socializing the dog and keeping up with his vet care as part of the volunteer agreement.

Mochi graduates in February 2021. Once Mia turns in Mochi to Canine Companions, he enters professional training at a regional training center for four to nine months, the website said.

Mia said only about 55% of trained animals actually go on to be service animals, but she is determined to make Mochi one of them.

And while Mia—and her family—have fallen completely in love with the dog, which will make saying goodbye harder, Mia knows when Mochi graduates it will all be worth it.