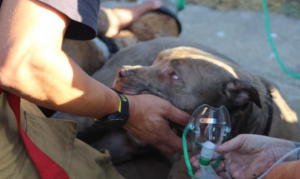 Since many fire departments are only equipped with emergency supplies to save human lives, a Scottsdale-based nonprofit is providing local firefighters with tools to help save animal lives.

The Fetch Foundation has developed a Fido Bag — a specialized breathing apparatus that is formed to fit across pet’s mouth.

The kits also feature collapsable water dishes and stuffed toys to accompany an inured pet on its way to a veterinarian’s office or pet hospital.

Dedicated to saving lives in both the animal and human communities, the Fetch Foundation is comprised of a family of animal loving first responders.

For last ten years, the organization has used innovative strategies and unique programs to support, equip, and train first responders on how to use the animal-lifesaving equipment.

As the Ocotillo Fire burned in Cave Creek over the weekend, Fetch Foundation Founder Marie Peck worked hard to provide firefighters in the area with FIDO BAGs.

“When we were speaking with the hot shot crews and handing out the Fido Bags, which they had never even heard of or seen before, they were sharing with us memories and experiences where they were on fires – animals left behind needing to be resuscitated, animals running with burns and smoke inhalation and they had no tools to take care of critters, but now they do,” Peck told KTAR News 92.3 FM. on Monday.

On Monday morning, Phoenix firefighters saved two large dogs with the equipment after they were pulled from a house fire near 8th street and Carter in South Phoenix. Both dogs were treated for smoke inhalation but are expected to be okay thanks to the Fetch Foundation’s tools.

The Fetch Foundation’s reach goes beyond the Valley and state of Arizona. They have also donated bags to fire departments across the nation and globe.

But as the supply chain has slowed due to the coronavirus outbreak, Peck has struggled to get necessary supplies for the Fido Bags. However, her organization has continued to donate bags with whatever supplies they do have.

The nonprofit runs on donations alone and works to provide a safe place for homeless dogs that were neglected or abused.

They also work closely with other rescue organizations and shelters to identify dogs that have the potential to be trained to become Search and Service dogs or a therapy dog for veterans or people with disabilities.