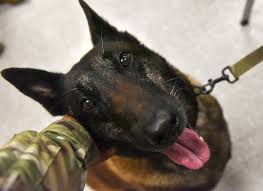 Mani began his career in 2011 here at Kunsan Air Base, Republic of Korea, where he accumulated more than 1,500 hours of law enforcement patrols.

“During this past year, every morning I would come into work and start my routine with his one raspy bark,” Kunkler said. “[He was] always eager to get away from his younger colleagues for some peace and quiet. He would trot to the exit of the runs and patiently sit, waiting for me to open the door.

“When we got outside, he would make his way to this specific spot and make sure it was marked while trying to catch his breath,” Kunkler said. “Mani was always the first one to go to bed, and the last one to wake up. I couldn’t imagine this year without the old man. He knew every day was going to be a good day. If anyone was feeling down, he’d sprawl across your lap and make sure you had a friend.”

Mani will retire to Charleston, South Carolina, where his former handler Staff Sgt. Jake Mikell, 628th SFS, will look after him.

“Ever since I left Korea, I knew I wanted to adopt Mani,” Mikell said. “Korea is very unique in the sense that we are allowed to bring our dogs back to our dorm rooms as much as we want. Mani spent practically every night in my room and got me through some hard times while I was in Korea toward the end of my time there.

Mani’s last patrol was during the 8th Fighter Wing’s recent 9/11 memorial ceremony. He spent a lot of the time laying down, but when it was time to move, Mani was ready, like always.

As attendees said their goodbyes to Mani at the end of the ceremony, they had the opportunity to both pet and give dog treats to Mani.

He received his final salute from the squadron and, after 9 long years, Mani was on his way to his forever home.  It was clear that the 8th SFS and MWD section will miss him dearly.

“I’m gonna miss the old pup,” Kunkler said. “But the couch life was a long time coming and be deserves it after his time serving in the world’s greatest Air Force.”

Farewell, Mani. Thank you for your service.