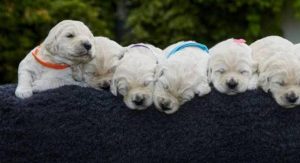 When Dave Fleming got ‘matched’ with his dream dog from a rescue charity he was thrilled.

There was just one hitch though — the logistics of getting Bumble on the 150k journey to his ‘forever home’ with Covid-19 restrictions limiting non-essential travel to 2, and then 5k.

Bumble was being well looked after in Kerry but Dave was keen to get him settled as a key family member and was also aware that all the enforced free time would be great to use for walks.

So Dave, an Abbey actor who’s currently in lockdown at his partner’s family’s farm in Laois, put out an appeal on Twitter.

He asked if there were any essential workers travelling that particular route who would be willing to help out. His post was shared hundreds of times and he spoke to a few good samaritans.

Now Bumble is home and enjoying being walked and praised and being top dog.

“He’s a very handsome dog alright and he has settled right in here. We’re delighted with him,” says Dave.

Bumble is a collie mix and Dave believes he may have been up for adoption due to not making the grade as a sheepdog: “We quickly realised that he has eyesight problems — cataracts.

“He’s able to find his way around alright so it’s not a huge problem. He hadn’t been mistreated as he has a very easy-going temperament so we reckon he was just rounding up the wrong things!”

Even in ‘normal times’ the process of matching dogs with owners can take some time if prospective owners are keen for a pet of a particular breed or age.

Agencies rehoming pets have to interview owners and assess their home for any dangers or escape routes that a new owner might not have spotted.

The Cork Society for the Prevent of Cruelty to Animals (CSPCA) had to close its door for the past two months but is now aiming to restart viewings by appointment only from June 3.

Manager, Vincent Cashman, said: “This, of course, will depend on how things are working regarding the Covid-19 outbreak and governmental advice and will be subject to change if we deem it necessary.

“This is a big change for our normal way of operating — as many of you know, you could just walk in for viewings previously but we need the full cooperation of you the public for this to work.”

However, his big concern is that people who bought a dog on a whim due to being home from work or to help keep children entertained during lockdown will not want to keep it once they return to work and children’s sports and school activities resume.

“We have only had eight dog surrenders over the past two months. Normally we would have that many in a week. And other animals too such as cats, goats, rabbits and even Giant African snails.

“But we do fear that it may suit some people to have a dog around now and that they won’t keep it once this is over. I need to say this: you don’t need a dog to just go for a walk. You don’t need ‘an excuse’.”

Unusually, the CSPCA doesn’t have any cats for rehoming at the moment: “That’s probably because people are selling then online to whoever instead.”

The new pet adoption arrangement plans include bringing the dog to meet the prospective new owner in the exercise run.

Home inspections or will be carried out on a limited basis — if the garden is accessible through a side gate for example.

“All this is totally dependent on the latest safety guidelines and everything can change depending on expert advice,” warns Vincent.