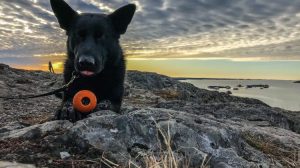 Today (Thursday, June 4th) Yellowknife RCMP released an update on the investigation into the incident yesterday where a police officer discharged his firearm at an aggressive dog.

The release says NT RCMP has initiated an Independent Officer Review (IOR) of the incident to determine if the RCMP’s policies and procedures were followed in the given circumstance.

The review will be conducted by a commissioned officer of Inspector rank or higher, who is independent of the involved incident.

The release also included a correction to the time of the incident, originally 11:30 am, to approximately 10:45 am.

According to RCMP, on Wednesday Police Dog Services (PDS) were conducting a training session in the area of 49 Ave and 44 St in downtown Yellowknife.

PDS training sessions may include urban public areas, such as back alleys.

During the session, Police Service Dog Hoss and his handler had an interaction with two aggressive unleashed dogs. The PDS member was first injured, with PSD Hoss also sustaining an injury.

As the interaction progressed, the member discharged his firearm injuring one of the two unleashed dogs as a result. The injured dog was taken to a local veterinary office for treatment, and both the PDS handler and Hoss were treated for non-life threatening injuries and released.

The release then states that PDS handlers and Police Service Dogs are highly trained, valuable members of the RCMP, and PDS handlers understand the unique bond between an owner and a dog and share a concern anytime a dog is injured.

The IOR is ongoing, and no further details will be released.