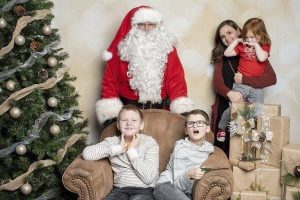 One Somerset family is expressing their gratitude for their local community, which has come together to help them make life better and safer for two of their children.

Brothers Dylan, 13, and Chase, 12, are the sons of Jami Johnson. Both were diagnosed as being on the autism spectrum as toddlers. And while the family has adjusted well to their unique situation, it was further complicated in June of last year when Chase suffered a seizure. He has since begun medication in an effort to prevent them but when they do occur, there is a danger of aspiration due to vomiting.

“I need an extra set of eyes for him,” Johnson explained, adding that he exhibits no other symptoms before going lethargic.

In September, the mother applied to 4 Paws for Ability, an Ohio-based service dog organization geared toward giving children and adults with disabilities dogs that have been trained for the specific needs of each family.

The dog, Johnson explained, would mainly help alert her and others when Chase is about to have a seizure, but it should also help calm Dylan, who can exhibit self-harming behaviors.

“[T]he most important task of all is being their best friend,” Johnson wrote in a fundraising flyer. “…Our family and our boys would be ‘fur-ever’ grateful for your help and your support.”

To actually be placed on 4 Paws’ waiting list, the family first had to raise $17,000 — which they just accomplished Wednesday, mainly through the “4 Paws for Dylan + Chase” Facebook page.

One step closer to what will undoubtedly be a life-changing gift, the family must now be assigned a dog that will be trained just for the boys’ needs and then trained specifically with the family in class. “There’s a two-and-a-half-year wait,” Johnson noted.

In the meantime, Johnson is also working with the family’s insurance carrier to approve a special medical bed for Chase which would alert when he undergoes a rapid temperature change — a warning sign for seizures.

While distance learning through the pandemic, both Dylan and Chase currently attend Northern Middle School.