Raising Money For A Service Dog 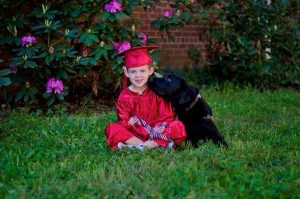 Last year we introduced you to Mason Bowling and his family. They were asking the community to help them raise money for a cause close their hearts: an autism service dog to help Mason with every aspect of daily life.

Mason is autistic and also has a genetic chromosome disorder.

At a cost of $25,000 the Bowling family needed help from the community so Mason could get his service dog. This included organizing a basketball tournament with the help of Damon Johnson, a former University of Tennessee and professional basketball player.

After raising money, the Bowling family finally met their goal and were able to then start the process of getting the dog for Mason.

In April, they welcomed Kevin into their home. The dog is still training to work with Mason on controlling meltdowns and aggression, social interactions, search and rescue, and medication if that is needed one day. They expect the dog to be a best friend for Mason, who has a hard time making them.

“I hope that he is understood better, by the dog calming him,” Mason’s mom Danielle Bowling told News Channel 11 in an interview last year. “We’ve tried everything and nothing seems to work. We’re in hopes that this will be it.”

Danielle confirmed that now the dog is adjusting well with the family, and he and Mason have already bonded.