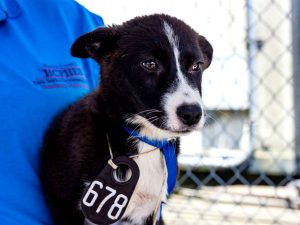 As more Americans stay home during enforced quarantines — such as the stay-home extension ordered by Harris County Judge Lina Hidalgo — a dark trend has emerged. Reports across the country reflect an increase in domestic violence, which experts blame on isolation, stress, and anxiety.

One reason why individuals stay in abusive households is to protect children or pets, according to the National Coalition Against Domestic Violence. Here in Houston, a local organization has launched a new program to create a safe space for pets in dangerous environments.

While there are Houston-area programs offering boarding for animals during traditional work hours, Pet Protect aims to bridge the gap by offering a survivor the ability to board their animal at a safe location at any time of the day, according to a release.

Houston PetSet has partnered with Westbury Animal Hospital to offer boarding for pets when survivors of domestic violence are looking to leave their current situation Monday – Friday after 5 pm and before 8 am, and on weekends and holidays.

Houston Dog Ranch has also joined Pet Protect to offer boarding for animals that will come into the program Monday – Friday from 8 am to 5 pm. Pets at the Houston Dog Ranch also receive behavioral assessments, training, and play group experiences, when appropriate.

Pet Protect will serve as a pilot program to survivors of domestic violence and their pets at no charge for upwards of 30 days.

“Since the stay-home, work-safe order was enacted, we’ve seen an increase in reports of domestic violence,” said Tama Lundquist, co-president of Houston PetSet, in a statement. “Unfortunately, we know that oftentimes an abuser will use a pet as leverage to keep their victim in the home. We hope that by launching the Pet Protect program, survivors will have peace of mind knowing that they can safely escape with their pet, and their companion will be cared for until the survivor can make their next transition in life.”

Houston PetSet is currently working with the Harris County Sheriff’s Office, the Houston Police Department, the Harris County District Attorney’s Office,  and the Houston Area Women’s Center to provide this program to survivors with animals. Those who need assistance should visit houstonpetset.org/pet-protect for more information.