Police Officer And His Dog 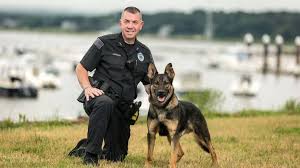 A police officer was forced to shoot his own dog after it turned on him while on duty.

Keith Larson, a veteran officer from Massachusetts, had to kill his German Shepherd, Nico after it attacked him at a crime scene.

He was responding to an early call on Tuesday where a suspect had fled the scene.

Police Chief Michael Botieri said in a statement that Officer Larson was preparing his service dog when the incident happened. It was shared on Twitter, with the Plymouth Police Department writing to followers: “Please keep K-9 Officer Keith Larson and Nico in your thoughts.”

The statement read: “After several attempts to disengage Nico, officer Larson was forced to utilise his service weapon. Unfortunately Nico died at the scene.

“Several officers as well as Brewster Ambulance personnel were dispatched to assist Officer Larson. Officer Larson was transported to South Shore Hospital to be treated for injuries to his hands.

Speaking at a press conference, Botieri said: “The report we got from the sheriff’s department is that they were working together as a team and [had] no issues.

“It happened in less than 30-45 seconds, which is a long time that he had to go through that. I’m sure you realise it is difficult for as K-9 officer to dispatch their own dog like that.”

The chief said Officer Larson is being treated for injuries to his hands, adding that the force is hoping he makes a quick recovery.

Chief Botieri said: “It’s always difficult to see any of your officers injured. We feel bad about that.”

A witness at the scene told local news outlet WXTF that she had heard three gunshots, before seeing the officer struggling on the ground.

Witness Lori Medeiros said: “I didn’t hear any yelling or screaming. I just saw the officer down on the ground and I know he was obviously in distress.”