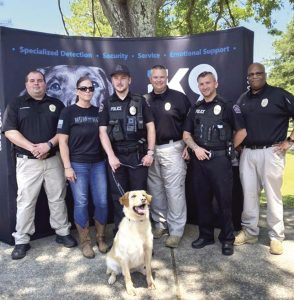 The Moody Police Department has added a member to its ranks.

Suzi is the new K9 for the department’s Narcotics Unit. She was donated by iK9 and the 1st Foundation in memory of the late Lt. Stephen Williams. The news was announced last month on the department’s Facebook page.

Williams was a 23-year veteran and night sergeant for the Moody Police Department who passed away June 2 while in the line of duty. He was promoted posthumously.

“Every time you look at Suzie, you see Suzie around, you think, ‘You know, that’s a part of Stephen that’s with us today,’” said Moody Chief of Police Thomas Hunt

Suzie was named after Williams’ Suzuki motorcycle by his wife, Michelle Williams. Suzi, a golden retriever, is the second K9 unit at the Moody Police Department, joining the agency’s therapy dog, Izzy, who is a black labradoodle.

“Having a therapeutic dog and a narcotics dog in the department, both have been very instrumental to us. Izzy will be involved in our school system, of course, where the narcotics dog, Suzie, will be on patrol with Officer Burns,” said Hunt

Hunt believes having Suzie will allow for his department to be more effective in getting drugs off of the streets because dogs have a much stronger sense of smell and have the ability to locate illegal drugs much better than humans alone can.

“Having Suzie is going to be very instrumental for patrol. We’ve had a K9 in the past. Back in the mid-2000s to late 2000s, we had a black labrador named Nemo, and its handler was an assistant chief, Rusty Freeman,” said Hunt.

“Nemo, back in his day, was an exceptional dog. Our dog park is named after Nemo. He found just lots of drugs and, you know, took them off the interstate in our streets here in Moody, so bringing Suzie on board is just a continuation of what Nemo did for us here at Moody Police Department.”

Suzie is finishing training with her handler, Officer Austin Burns, and will soon be on duty with Burns to help get drugs off of the streets.

Burns said he has enjoyed working with Suzie and training with her, and believes she will play a key role in anything drug related.

“It’s been tons of fun (working with Suzie). Even with her just riding around with me is a lot of fun,” said Burns

Burns said having Suzie donated in memory of Williams also meant a lot to him.

“[Williams] was my training officer when I first started here. Me and him were super close. He was my sergeant and he meant a lot to me,” said Burns.