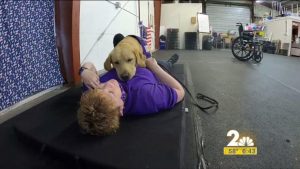 Paws for Purple Hearts is the first program of its kind to offer therapeutic intervention for veterans and active-duty military. It’s about establishing trust and connection with warriors facing challenges and who better to do that than specially trained service dogs helping on the road to recovery.

Just as playful as they want to be, 1-year old Reagan and 4 month old Andi are service dogs in training. The two are learning commands and skills to eventually be paired up with and placed with a Veteran or active duty service member facing challenges.

“Whether that is standing with them during an anxiety attack or post traumatic stress issue or whether it’s helping them pick something up or with mobility or even turning off a light switch or turning it on,” said Instructor, Melissa Kitko.

Kitko, a Veteran herself said it’s not always easy to ask for help.

“We warriors want to be the helper, not ask for help, so the third option is get their battle buddy to do it for them,” she said.

“We’ve seen what this can do to change somebody’s life,” added Program Instructor, Debbie Zastrow Yanagida.

The service dogs train for 2 years and can start as young as 2 weeks old. They learn mobility tasks. Things like walking along side a wheelchair or tugging to open a door. They’re also trained to recognize signs of post traumatic stress. Kitko demonstrated how Reagan is able to recognize something like an anxiety attack. Kitko tapped her leg repeatedly to signal experiencing an anxiety attack. Soon after, Reagan nudged her leg to help calm her down. Kitko also laid on her back demonstrating the command lay on, which is where the service dog will lay on top of its handler and the weight of the dog provides a comforting effect to a warrior experiencing PTSD.

“They will lay here for as long as we ask,” said Kitko.

Training and placing the service dogs is a bond both instructors say is priceless and a connection that is ever lasting.

“When we make a match of a dog and a person, they, it’s just beautiful,” said Kitko.

“To just see how that can absolutely change somebody’s life is all worth it absolutely amazing,” added Yanagida.

Paws for Purple Hearts has placed 117 dogs and directly improved the lives of more than 8,400 warriors. The organization is also in need of volunteers.