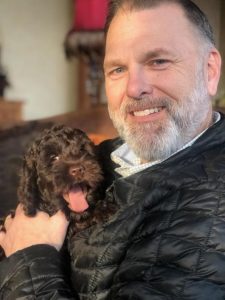 Recently, a grant program allowed Howard Superior II to procure Kadence, a 6-month-old labradoodle, who soon will undergo training to work as a post traumatic stress disorder (PTSD) and anxiety support dog. Kadence, or K-D for short, will work primarily with participants in the veterans court, operated by Judge Brant Parry, as well as his mental health court and even the juvenile court operated out of Howard Circuit Court.

“She’s a delight to work with already, and she’s almost 6 months old,” said Richard Cotterell, the coordinator for the Howard County Veterans Program. “She’ll start her full certification process sometime in June. Hopefully with the COVID restrictions and everything in place, we can work around that. But the idea is to have her fully trained and certified, ready to go by the end of the year.”

According to Parry, Kadence was purchased in February utilizing a grant program. Since then, she’s been coming into the courthouse with the judge regularly, often hanging around the probation department, greeting probationers as they check in.

The judge said he got the idea to purchase a therapy dog after hearing about how dogs have proven helpful to people in a variety of situations, such as while working as service dogs. From there the idea grew as he considered the roughly 20 participants in his courts veterans program.

“I would say the majority of our people deal with some sort of anxiety issue, especially when it comes to reporting to probation, coming to court, also anxiety about entering the job force and going to interviews and those types of things, and also anxiety when they have to talk about their experiences if they were deployed or saw action in service,” said Parry. “I would say another quarter of them have a specific diagnosis of PTSD. So I think the dog will be useful for everybody, to relax them when they come in to meet, to go to the groups with them.” Kadence soon will undergo training with Indiana Working Dogs, which is owned and operated by Darren Petty. According to Petty, K-D’s training will focus primarily on training that ensures she stays relaxed in group settings, such as the courtroom. Essentially, Kadence’s skillset will allow her to serve as a calming presence for those who need her services. In the case of the veterans court, many of its participants are going through their first experiences in a courtroom, which can be stressful as they work their way through the program.

“What we’re after is security for the veteran,” said Petty. “Give them that security blanket and help them get through a tough time in their life. We know that many veterans suffer through many different issues from their service. If this is a way for that veteran to get their life back on track, that’s what we’re after. If the dog can be there and let them relax and help that veteran get a more positive outlook on their life and how to get back on track, that’s what this program is all about.”

But the therapy dog won’t only be working with those in the veterans court program. Parry also operates a mental health court, where he said her services also would likely be helpful. Additionally, he said he’s had discussions with Juvenile Referee Erik May, and when she’s needed in juvenile court, she also can help calm children in the courtroom, perhaps as they are called to testify.

“There’s lots of studies about dogs that are used in courts that sit with kids when they have to testify,” said Parry. “It really helps the kids. I’m going to try to put the dog to as much use as possible throughout the entire system. Her first responsibility will be with the veterans’ court, then mental health court, and then anywhere we think she can get better results in either probation or juvenile court, and that’s what we’re going to do.”

Parry said the cost of Kadence’s veterinary care and grooming will be covered by the same state grant utilized to purchase her. The judge said agreements have been brokered with All God’s Creatures for grooming services and Kokomo Animal Hospital for veterinary care. In the evenings, the therapy dog will stay with Parry.