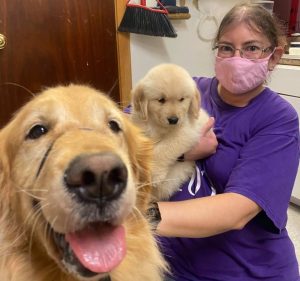 Newmarket resident Amanda Robar has had epilepsy her whole life and has relied on the assistance of her service dog when she goes about her daily life outside of her home. Now she needs a new one and has turned to the community to help cover the considerable training cost.

Local residents and businesses have helped raise more than $11,000 for her new puppy’s training at a time when normal fundraising activities such as golf tournaments and other events are impossible due to the pandemic.

“The community support has been amazing so far. Having a service dog gives me the confidence to go out on my own into the community, so having the community’s help makes me so grateful because I couldn’t do this without it,” said Robar.

Robar has had two service dogs so far. With her current one, a golden retriever named Kramer, now eight years old, it is time to start training her replacement, a process that takes roughly two years.

With the $11,000 she has received so far from a crowdfunding campaign and other donations, she has found a golden retriever puppy named Cable currently undergoing service dog training. But she expects that the total cost of Cable’s training will be closer to $36,000.

Each animal requires special training to meet her specific symptoms and disabilities, including arthritis, autoimmune disorders, vision impairment, and depression.

Some of the behaviours she needs Cable to be taught is to lick her hand to bring her out of a seizure and, if they persist, to help Robar lie down and use the dog’s head and paw to keep her from moving.

Robar also has seizures that can leave her disoriented and cause her to wander. Cable will be trained to not allow her to cross a street without first being given a signal to tell him it’s OK. The dog will also be able to guide her home from wherever they are and find her a place to sit if she has had multiple seizures.

The dog will also be trained to push an emergency button that Robar’s brother designed that will automatically call her family if she has a major seizure that leaves her incapacitated.

Cable is a few months into his training, and Robar expects she will be able to take him home when he is 18 months old. In the meantime, she has set up a blog and a Facebook page to keep her supporters informed of how everything is going.