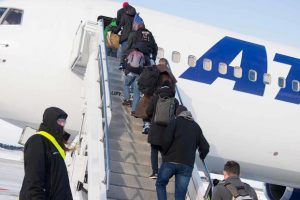 Military.com | By Patricia Kime
The Air Force has ended its policy allowing emotional support animals on military charter flights overseas — an abrupt move that has sent some service members and families scrambling to book alternative transportation for their pets.

Air Mobility Command announced Aug. 2 that “effective immediately” a policy change has been made to Defense Department travel rules. The animals now must have a reservation for the cabin or cargo hold, depending on their size.

Advertisement
For personnel with small dogs or cats that fit into vented carry-on bags, the change isn’t much of an issue, merely requiring additional paperwork and a reservation for a space under an airplane seat.

Read Next: Lawmaker Offers Glimpse Inside Fort Lee’s Temporary Home for Afghan Allies and Their Families

But for those with larger dogs — such as Navy spouse Alicia DeGroot, whose dog Bella weighs roughly 40 pounds — the new regulation requires paperwork; a proper-sized kennel or crate; a reservation in one of the few spots available in the cargo hold; and additional fees of between $125 and $375, depending on weight.

Advertisement
The decision has baffled DeGroot, whose family is moving from Spain to Japan and is in the United States visiting relatives for the summer.

“PCSing is hard enough. PCSing in COVID is even harder, and now this. People are finding this out when they are flying out,” DeGroot said Tuesday in an interview with Military.com referencing a permanent change of station for military members.

Command spokesman Capt. Frederick Wallace said the change is in line with guidance issued July 30 by the Office of the Undersecretary of Defense that followed a Department of Transportation ruling restricting animals in airline cabins to service dogs.

In 2008, the Department of Transportation began requiring airlines to let passengers bring animals on board if they had a note from a doctor saying the animal was needed for emotional support.

But in December 2020, the department reversed its decision, recommending that airlines limit animals in passenger cabins to service dogs — those defined as having special training to help their handlers with physical, intellectual, psychiatric or mental disabilities.

Emotional support animals, under the ruling, are considered the same as pets: Airlines could choose to continue transporting them in cabins at no cost, but nearly all have stopped allowing them in passenger cabins unless they are small enough to fit under a seat and remain in their carry-ons.

The new ruling affects all who have access to Patriot Express flights, which are contracted by the Defense Department for personnel and military families traveling between duty stations, as well as retirees, federal employees and some veterans on a case-by-case basis.

This year, at the beginning of the traditional military family moving season, Air Mobility Command increased pet spaces in passenger cabins to 20. But space remains limited to between four and 10 kennel spots in cargo holds, depending on the aircraft.

Under DoD travel regulations, passengers can request up to two pet reservations per family; the pets must travel on the same flight with their humans.

DeGroot has had Bella for 11 years and said the Labrador Retriever-mix helps her deal with anxiety related to change, a constant of the military lifestyle. She received paperwork designating Bella as her emotional support animal a couple of months ago.

Now, she is scrambling to figure out how to get Bella to Japan. She has been told the dog could get a reservation on a Patriot Express flight Aug. 19, but the family’s flight is scheduled for Aug. 26, so that won’t work.

DeGroot is considering a commercial cargo flight that could cost the family $5,000.

“It’s a mess. It’s a load of baloney that [the policy] is effective immediately,” she said.

DeGroot would like to see Air Mobility Command open up more cargo spots for animals.

“If we were going somewhere in the States, we’d drive. But we are literally flying to a place we can’t drive to,” she said. “They should make more cargo spots or just make a rule in the military that you can’t have pets. It’s insane.”

Wallace said that increasing the number of cargo spaces is simply not possible.

“Unfortunately, the number of pet spaces in the cargo compartment cannot be increased due to aircraft limitations, contract compliance, and oxygen availability to pets,” he said.

Just how many families have been affected by the change is unknown; Wallace said that Air Mobility Command does not “track pets that depart a location … by emotional support animal status.”

On the command’s airport Facebook pages, a handful of military families have posted that they needed to make alternative arrangements.

The new rule does not affect service dogs. Troops or family members with service dogs still can take their animal on Patriot Express flights. Under the guidance, the dog must sit either on the handler’s lap or within the handler’s foot space.

The animals must be harnessed or leashed at all times.