More Then A Service Dog 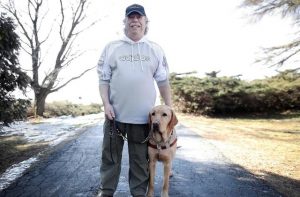 Take one look at the fox-red Labrador retriever sprawled across the living room rug, and you might easily mistake him for an easygoing family pet.

But Tom Garrett of Janesville knows the 92-pound dog, named Clifford, is so much more.

Just look at what happens when Garrett brings out the harness. The hulking Lab jumps to attention, and his whole demeanor shifts into work mode.

The union was life-changing.

Garrett, who has been legally blind since childhood, depends on Clifford to safely guide him in a variety of situations.

“Clifford is literally my eyes,” he said.

The bond between him and his guide dog is much stronger than the bond with a family pet.

“A guide dog develops a real sense of protective responsibilities,” Garrett told The Janesville Gazette. “They are with you 24 hours a day.”

The dog takes Garrett around obstructions, stops at curbs and stairs, and is great at finding doors. Clifford even helps Garrett find empty chairs in waiting rooms.

Clifford also quickly learns the routes to and from places where Garrett often goes. In the grocery store, the Lab knows where the meat and produce sections are.

When Garrett is outdoors on his 2-acre rural property, Clifford helps him find key places, including Garrett’s four beehives.

In addition, 73-year-old Garrett has more independence traveling to festivals to play the banjo, mandolin and fiddle with Clifford at his side.

“He’s really superb at the job he does,” Garrett said.

“Every time I go out, I have to remind people not to distract Clifford,” Garrett said. “When you see a dog wearing a harness, that dog is focused on doing his job. Don’t talk to him. Don’t call him by name. Don’t look him in the eye. If he goes to be petted, he lets me run into things.”

People are more understanding of service dogs than they used to be, and many legitimate service dogs help people with diabetes, post-traumatic stress disorder and hearing impairment.

But Garrett said the law does not recognize “comfort” or “emotional support” dogs as legal service dogs.

Prior to 2012, Garrett used a white cane to help him navigate in the world.

When he learned about the Guiding Eyes school and its highly trained dogs, he applied for his first dog.

The nonprofit school, which provides all services free, matched Garrett with a yellow Lab named J.J.

When the dog died at age 9, Garrett was devastated.

He applied to the school for a second guide dog and asked for “a big, robust and rowdy yellow Lab.”

From the beginning, both were smitten.

The first time Garrett took Clifford for play time, the two bonded right away, even though Clifford’s trainer came along.

Garrett stayed at the Guiding Eyes school for three weeks and worked with Clifford every day until they became a team.

The school’s mission is to create and support life-changing connections between people and dogs. It relies almost entirely on donations from individuals, corporations and foundations to do its work.

The school’s guide dogs are known for their exceptional temperaments and success at helping people gain independence, according to materials from the school.

One guide dog team costs about $50,000 to breed, raise, train, match and support over the lifetime of the team’s work together.

Most guide dogs are Labrador retrievers, but a few are German shepherds. They spend six to 12 months undergoing formal training with a professional instructor.

Dogs are then carefully matched with handlers based on how fast the handler walks, how hard the dog pulls and their personalities.

Garrett couldn’t be happier with his matches.

“Clifford has the genes and the temperament to be the kind of guide dog you want,” Garrett said. “He is focused on doing his job.”