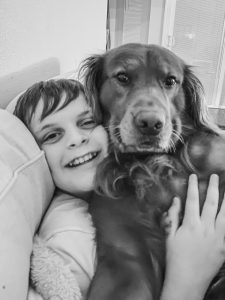 When 12-year-old Ethan Eberhart was diagnosed with Tourette syndrome, severe anxiety and ADHD, his family got him Blue.

The emotional support dog helps Eberhart calm down when he becomes too anxious. But now, the beloved Golden Retriever is missing.

“He was always just a really, really sweet dog to me,” said Eberhart. “When I was always upset at something, or just anxious, I would go over to him or he would just come over to me.”

Ethan’s mother Gillian Eberhart says Blue escaped from their backyard on Monday after their gate was accidentally left open by a lawn care company.

“Nobody’s really seen him. So that’s what really concerns me. He usually sticks pretty close,” said Gillian. “We’re in the Bloomingdale area and we’re in the Preston Woods subdivision. We actually back up to some other subdivisions in the area, so it kind of makes it a little difficult for us to do a really good search.”

The Eberharts tell WFLA.com their search is also challenging because they recently moved from Colorado to the Valrico area. Therefore, their contacts are limited. They hope by distributing missing posters of Blue and offering a $500 reward for his return, they’ll generate enough leads to bring the beloved 5-year-old pup home.

“My husband is in the Army, so we moved right before the pandemic. So we don’t have a lot of contacts here,” said Gillian. “Anybody, if they have been taking care of him, we’re super appreciative. We just want him back. We love him dearly. He’s much more than just a typical pet to us. He’s a part of our family.”