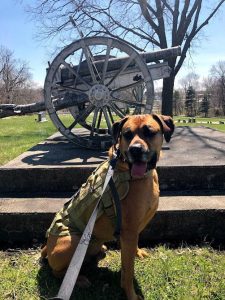 Even after receiving a purple heart for his service in Afghanistan, Loki, a 12-year-old Boxer/Rottweiler mix was not ready to stop working.

He may be done using his nose to sniff out bombs, but his keen instincts led him to his retirement in Crete.

“James told me that he [Loki] has never done that to anyone other than him and that it meant something,” Rockenbach said.

Page got Loki when he was a six-week-old puppy in a program training bomb dogs. He continued Loki’s training in search and seizure, explosive searches and anti-terrorism measures.

“Loki is what I call a ‘free spirit,’” Page said. “He’s real smart. Sometimes too smart for his own good. I had to make sure he’s real secure or I would find him in my bunk or laying on top of me. He was always a mischievous puppy.”

Loki was with Page for 12 years including two tours to Afghanistan. Checking out vehicles at a stop post sniffing out explosives and chemicals was Loki’s job.

Page and Loki were checking a family and their vehicle when Loki caught a caught the scent of something a couple kilometers away. The two went to investigate. As Page got close enough to investigate, Loki jumped.

“He smelled something that just wasn’t right and he jumped into me,” Page said. “It was a land mine.”

Loki took the most of the blast for Page and ended up with a chest full of shrapnel.

When Page woke up, the medic was checking Loki out. He was unresponsive. The medic used electric shock paddles twice to bring Loki back. Page begged medics to use them again. Loki woke up.

Once the two were stable, they were flown back to the United States. When Page woke up after extensive surgery, Loki was already back at his bedside.

This act of loyalty and bravery earned Loki a Purple Heart.

During Page’s recovery, Loki was given to someone else to continue his work.

As part of the program, when the handler gets hurt, the dog has to go to the next person. Loki was re-trained to work with someone else.

“[One of my captains] said, ‘Loki won’t work with anybody else,’” Page said. “I was like, ‘I could have told you that from the beginning.’”

He verbally alerts of people he sees that are strangers, have face coverings or hoods that block their face. He also does not like loud sounds and tries to take cover and get to safety as they remind him of bombs.

Rockenbach found out how smart Loki is. He learned what the spelling of o-u-t is so they have to say “external part of the house” now.

“I tried to warn her [Tina], you have to have a firm hand with him. If he thinks he can get away with something, he’s going to get away with it. He will give you those eyes like he didn’t do anything wrong,” Page said.

Since he had training in bailing out of a Humvee, he was trained on how to open car doors.

“We have to be conscientious of him more as a human than a dog many times,” Rockenbach said.

Loki also has a sense for those who have served.

“He knows when he is around soldiers,” Page said. “He will find them quickly. He has a sense of who he can trust.”

Rockenbach said Loki enjoys spending time at Riverside Cemetery and visiting the graves of veterans there. He has a sense for spirits, Rockenbach said.

“We don’t know them, but he seems to connect in a way that he understands.” Rockenbach said.

Since becoming a service dog, he is trained for comfort for post-traumatic stress disorder and anxiety.

“When he has his vest on, he becomes a completely different dog,” Rockenbach said. “He switches from goofy pet to ‘GI Joe.’”

She also is interested in going to groups or schools and telling his story and informing people on what Loki was trained to do.

Loki may be retired from the military, but he will continue to work as a comfort and education animal. “He’s never going to truly retire,” Page said.