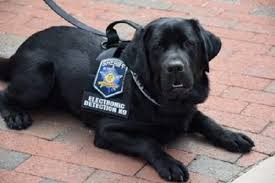 K-9 Sata is certified as an electronic storage detection (ESD) canine and derives his name from the Serial AT Attachment, a computer bus interface that connects mass storage devices and a commonly used connector in digital forensic examinations. ESD K-9s are dogs who are specially trained to detect the presence of electronic media storage or other digital evidence, such as hard drives, USB drives, and cell phones.

ESD K-9s came to prominence with the investigation of Subway pitchman, Jared Fogle, who was sentenced to 15 years in prison for having sex with minors. An ESD K-9 named Bear detected key evidence in Fogle’s home, aiding in his conviction. K-9 Bear was trained by Jordan Detection K-9, who also trained K-9 Sata. K-9 Sata is the 35th out of 37 ESD K-9s trained by Jordan Detection K-9 and deployed around the country. K-9 Sata is the first ESD K-9 in Maryland.

The cost of procuring K-9 Sata and the initial two-week handler training was generously donated by Neighborhood Electronic Detection K-9 Inc., a 501(c)(3) non-profit organization formed by a group of community minded individuals from the Indianapolis, Indiana area to fund and provide fully-trained ESD K-9s to law enforcement in order to remove child predators from our streets.

K-9 Sata and his new partner, Detective Carey Gerres, are assigned to the Harford County Child Advocacy Center’s (CAC) Internet Crimes Against Children (ICAC) Unit, whose focus is rescuing victims and arresting perpetrators of child sexual abuse material (CSAM – what is legally defined as child pornography) via the Internet and other related technology facilitated crimes against children.

ESD K-9s can also be cross trained for other missions and K-9 Sata will also be utilized as a therapy or comfort dog to support child victims and their families in the field or who visit the CAC to receive services. K-9 Sata will continue the work of Kilo, the HCSO’s first therapy dog, who sadly passed away in October of 2019.

“K9 Sata will allow the Harford County Sheriff’s Office to expand our investigative capabilities to address the growing number of cases involving digital media,” said Sheriff Gahler. “Access to this cutting edge opportunity greatly enhances our abilities to protect the most vulnerable among us – our children.”