Marine And His New Dog 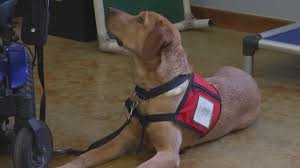 September is National Service Dog Month and this week a veteran from Central Texas began training with his own new helper.

Rhea Hambright and Beatrice are spending the week training at Service Dogs Incorporated in Dripping Springs.

Hambright is a Marine and was injured during the Vietnam War. He and his new service dog are getting to know each other after meeting for the first time on Monday.

Living alone on a farm in Fayetteville, Hambright says Beatrice will not only be a great companion but she’ll also be able to help him around the house by doing things like retrieving dropped objects, opening closed doors, and even helping him with his jacket.

“The way she looks at me. It’s just – to have an animal look you straight in the eye and concentrate there – it’s unbelievable. It’s a great feeling,” Hambright says.

“This is going to turn my whole life around. Everything I do – is going to be for that dog now. Not only is that dog helping me – I hope I’m helping that dog,” Hambright adds.

After 13 weeks of in home training, Hambright and Beatrice will be on their own. The cost of training a service dog is about $50,000 but there’s no charge for veterans and those who’ve served.