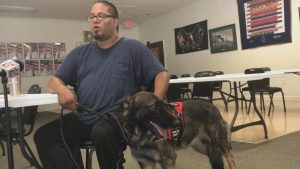 “This big stress and this big package that I’ve been hiking around with, whatnot, it’s gone. ‘Cause he just, he literally relaxes me,” Alverio said.

Alverio served in Somalia in the 1990s, and things he witnessed left a lasting impression on his memory. He said Lincoln helps him through daily stress.

“Instead of having to go to the doctor to get drugs to keep me calm and cool, whatnot, he’s my drug and actually helps me out a lot,” Alverio said. “That keeps me away from the drugs. Don’t have to take drugs and possibly get addicted to them.”

“You see the success that it breeds, you can’t help but get more involved in it,” Merimee said.

The relationship between Lincoln and Alverio runs deeper than a service dog and a handler.

“He helps out so much, and if it wasn’t for the community caring, and loving, and whatnot, I don’t think I would’ve had him,” Alverio said. “He’s a service animal when he has his vest on. He’s working when he has his vest on, and he knows that. When he doesn’t have his vest on and we’re at home, he’s a family member, and he knows the difference.”  Merimee said Lincoln is the sixth service dog given to a local veteran.