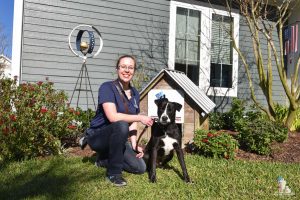 Amanda Peterson tried to go places with her family.

But she was limited to 40 minutes. That’s all she could stand before a tingling in her spine and a surge of overwhelming anxiety would set in causing the veteran of Michigan’s U.S. Army Reserves to panic.

“When people are scared they exhibit the flight or fight response. When I got an anxiety attack I came up swinging,” Peterson said, explaining how Post-Traumatic-Stress-Disorder impacted her life.

While she would never hit one of her children the possibility was there which only compounded her anxiety. She also suffered from suicidal thoughts and intentions brought on by nightmares and a tremendous guilt at not being able to be the wife and mother she wanted to be for Doug and their daughters Ariannah, 12, Leilah, 8, and Myrah, 5.

Then she got the help she needed. After battling PTSD for eight years Peterson sought the support she needed to overcome that which had taken over her life.

“Military personnel are always looking out for others – saying someone else is worse than me or whom am I to say I need help when there are so many more in trouble,” Peterson said. “Until a soldier is ready to ask for help there’s not much people can do.”

When Peterson joined the Army in the summer of 2001 it was to get an education. “I distinctly remember my mom being worried. I was 18 when I signed up and she asked me, is there any chance of a war?”

That fall the World Trade Center in New York was attacked and after six-months of basic training to become a member of the Military Police, Peterson found herself fighting terrorists in Afghanistan, where mortar attacks were an everyday occurrence. It the carnage created by these bombs, rocketed into buildings and city squares where crowds of people congregated, that haunted Peterson.

Among the worst, was an attack on a hospital in the middle of the night. Peterson said she remembers being knocked out of bed by the sounds and scrambling to get dressed into her uniform, grabbing her gun and rushing to the scene.

“It was a horrible site,” she said. Men, women and children, families that had gathered in a waiting room while their loved one was being cared for, by doctors and nurses going about their duty, broken to pieces by a mortar shell.

“I did everything from helping in the emergency room to locking down exits to make sure everyone was safe,” Peterson said, of her duties on that long and terrible night.

One would think after that she would be done. But Peterson carried on and was deployed two more times. It was on her second deployment that she became friends with a fellow member of her military police unit, who made her laugh despite the world they were in and easily transitioned from best friend to husband. “We got married at the church where I grew up wearing traditional wedding attire,” said the 37-year-old daughter of Gary and Christine Adams. Doug served alongside Peterson but by the time they were parents to their first little girl, he was able to serve as a stay-at-home dad.

As Peterson was shipped off to Iraq. “My last deployment was the hardest because my oldest daughter had just turned 1 when I left,” Peterson said.

Yet, she had to go. The mission required someone with her qualifications and skills. So, she weaned her daughter off breastmilk and with the promise from her husband, that their daughter would not forget her, Peterson headed overseas once again.

“I knew he would not let her forget me. He put a picture of the two of us on the fridge at her eye level and every day he reminded her to give mom a hug,” Peterson said.

While deployed she also participated in a USO program that allowed her to record herself reading a book. Knowing Ariannah would hear that every night before bed also helped her deal with the anxiety of being separated from her child.”I never realized what an emotional strain it would be. It was so hard. When I joined I had no one to worry about but me,” Peterson said. Once she became a wife and mother forced to leave her family behind every day in the military made it harder to stay.

“I got out in July of 2010,” Peterson said. “I knew after going through three deployments in nine years I could not do it again.

However, while she left the military it was not until she reached out to K9s for Warriors that she was able to enjoy her life at home.

Since 2011, K9s For Warriors has served as the nation’s largest provider of Service Dogs to military veterans like Peterson, who came home suffering with PTSD, Traumatic Brain Injury and/or Military Sexual Trauma. The program has a 99% success rate, which is one of the highest suicide prevention rates in any organization fighting to mitigate suicidal ideations.  “I always thought I did a good job of hiding my problem but my children,” Peterson said. “But when we told them I was going into the K9s For Warriors program and that it would help me, my daughter said, ‘Does that mean we can finally go places.'”

And oh, the places they have been. “We visited the aquarium at Great Lakes Crossing,” Peterson said, with a tone of triumph in her voice.

“We also went to a Jojo Siwa concert,” she added, referring to Joelle Joanie “JoJo” Siwa, who is a singer, actress and YouTube personality popular among tweens and teens. “The girls had so much fun. It’s amazing to see your children experience such undiluted happiness.”

Tagging along on all of their trips is Chesdin, the friendly service dog named after the lakeside community in Virginia that supported his training to become a K9 for warriors.

“Now when start zoning out and feeling a need to leave he will bump my leg or draw me back. Chesdin senses my anxiety building and instead of worrying about things that might happen I see the situation we’re in and what’s going to affect him instead,” Peterson said.