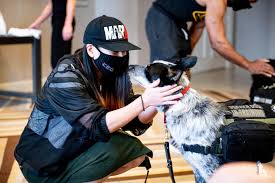 All-Elite Wrestling performers got a show of their own with visits from K9 for Warriors service dogs.

Several professional wrestlers earned some new fans this week of the four-legged variety before taking action in the ring at Daily’s Place.

Ponte Vedra Beach-based K9 For Warriors brought a team of seven service dogs-in-training to visit with members of Shad Khan’s All Elite Wrestling in Jacksonville before Wednesday night’s AEW Fyter Fest on TNT.

There was plenty of belly rubs, puppy kisses, rolling around on the floor and even an excursion on the Riverwalk for one wrestler and Air Force veteran Big Swole and service dog JD.

“It was absolutely amazing,” she said. “I’ve always wanted to be a part of something like this and meet the rescue dogs from K9s. I was so excited that I drove three hours this morning from my home in Clearwater just to see the puppies, so I’m all energized and ready for the show tonight.”

The nonprofit strives to return American service men and women who suffer from injuries and trauma to a life of dignity and independence by pairing them with rescued and trained shelter dogs.

AEW was introduced by Khan and his father Jacksonville Jaguars owner Shad Khan in January 2019. Tony Khan, who also serves as the Jaguars’ senior vice president of football administration and technology, runs the show for AEW.

K9s for Warriors CEO Rory Diamond said he was more than happy to give the dogs a unique training experience and the wrestlers a piece of home away from home.

“We’re proud to bring some joy and positivity to these athletes who understand the powerful benefits of dogs,” Diamond said. “It’s always fulfilling for us to help out our amazing Jacksonville community.”

Although the dogs are trained to stay focused on their warrior and wear vests with “Do Not Pet” signs, their handlers gave the “make a friend” cue letting them know the wrestlers could interact with them.

Organizers said all the human participants were screened for the coronavirus and followed health regulations during the visit.