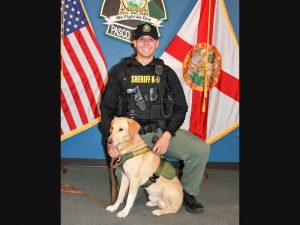 When it comes to fighting crime, the Pasco Sheriff’s Office believes it’s barking up the right tree.

The new dogs include a patrol K9, two K9s assigned to sheriff’s highway interdiction Ttam and two narcotics detection K9s assigned to the Land O Lakes Detention Center to help thwart the smuggling of illegal drugs into the jail.

At a welcoming event Thursday, Sheriff’s Col. Jeff Harrington spoke about the importance of the K9s’ work in Pasco County and thanked the community for providing the funding for the new dogs.

The Pasco County Sheriff’s Office was one of the first law enforcement agencies in Tampa Bay to routinely use K9s. The unit, including training, equipment, medical care and food for the dogs is funded through the Pasco Sheriff’s Charities.

Lt. Clint Cabbage, who oversees the K9 unit, said the all the K9s go through a rigorous selection and certification process before earning their badges. This includes specialized training designed for specific law enforcement tasks.

Chris, a German Shepherd who joined the K9 unit in 2017, is specially training to detect explosives and serves on the Tampa Bay Regional Bomb Squad, assisting at high-profile sporting events ad the Gasparilla Parade.

Trinity, also a German Shepherd, is a member of the National Narcotic Detector Dog Association. He’s responsible for hundreds of arrests and narcotics seizures.

Knox, a bloodhound that was purchased through a donation when he was just 8 weeks, underwent extensive training to learn to track and trail missing people and fleeing criminals. He is now certified through the National Police Bloodhound Association.

Phi, a yellow lab, is also certified by the NNDDA but his specialty is finding human remains on land and water. He has assisted the FBI on numerous cases.

The Pasco County Sheriff’s Office is also among the first law enforcement agencies to add mental health therapy dogs to its K9 unit. Charlie and Mango are trained to calm and comfort children in crisis, agitated people with mental health problems and drug addicts experiencing anxiety.