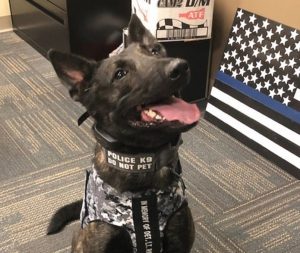 Vested Interest in K9s Inc. is a 501(c)(3) nationwide charity located in East Taunton, Massachusetts, whose mission is to provide bullet- and stab-protective vests and other assistance to dogs of law enforcement and related agencies throughout the United States. The nonprofit is pleased to continue their “Healthcare for K9 Heroes” medical insurance program for 2020 which covers annual policy premiums. Since 2016, the charity has donated over $125,000 towards medical reimbursement programs for self-funded K-9 units.

The “Healthcare for K9 Heroes” grant is awarded to departments who have the financial burden of raising funds to support their K-9 unit, who have no more than three K-9s, and who have previously been awarded a vest through Vested Interest in K9s Inc. Law enforcement dogs ages 2 through 7 are eligible. The annual medical reimbursement insurance policy, administered by Trupanion, will cover illnesses, injuries — including those sustained in the line of duty — diagnostic testing and therapies. The plan allows the freedom to use any licensed veterinarian, specialty center, or emergency hospital in the United States.

Trupanion, a leader in medical insurance for cats and dogs, offers injury and illnesses coverage for working and service dogs — both on and off duty. For nearly two decades, Trupanion has given pet owners and working dog owners peace of mind so they can focus on their dog’s recovery, not financial stress. Trupanion is honored to support these brave K-9 heroes and is committed to providing the highest value in medical insurance to help them receive the best veterinary care.