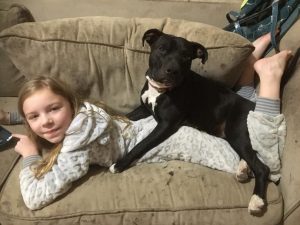 For many, pets are just like members of the family, and losing one of them can be traumatic. But when someone steals a very special member of the family right out of the front yard, it hurts even moreso.

Four-year-old Savannah likes playing with her brothers and sister, but bedtime for this little girl is no fun at all.

“She has night terrors, and Boots wakes her up and is able to stop them. Wakes her up to kind of calm her down,” said Savannah’s mom, Brittany Newton.

Newton said Boots is her daughter’s service dog, and a big part of their family.

Savannah loves the dog and spends a lot of time with the beloved pet; but last Friday, someone took Boots away from her — right out of the front yard.

The incident was caught on the family’s security camera.

“All of our dogs were out here, and somebody was walking past this way and just opened the gate and just grabbed Boots,” Newton said. “She grabbed her neck — by the skin of her neck, the scruff of her neck — and just pulled her through the gate. Picked it up and walked that way with her.”

Newton and Savannah’s father, Jerry Savala, would like for the person caught on tape to return the family pet as Savanna has had some long nights without her friend.

“She isn’t even able to sleep,” Savala said. “She’s had maybe six hour of sleep, which affects us ‘cause we’re not sleeping. We’re up dealing with the situation.”

Like most families these days, Newton and Savala have enough on their minds trying to keep their family safe. Now, they have even more to worry about.

“Everyone supposed to be coming together, staying safe,” Savala said. “Now you can’t have your dog out in your own yard no more?”

The family describes Boots as a 2-year-old female black pit bull-Lab mix. Boots has white on all four of her paws and on her chest, and she is microchipped.

They say they just want their dog back — no questions asked.

Get the latest updates from wowt.com delivered to your browser