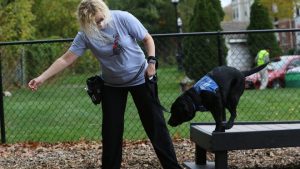 Although Hannah is only five months old, she’s already preparing for a job that will change someone’s life.

On a recent outing, the black Lab puppy sniffed the grass before snapping to attention when her trainer, resident Kara Hubbard, said her name.

Hubbard is temporarily raising the 40-pound canine that is part of the NEADS World Class Service Dogs, a nonprofit organization in Princeton. Since she is working from home due to the COVID pandemic, Hubbard felt she could devote the time and energy to raising and training a dog that could help someone in need. “This is a great way for us to be able to give back,” she said. Hubbard applied to be a full-time puppy trainer in June and went through a rigorous screening process before being accepted. Staff at NEADS, “really cared about where their puppies were going,” she said.

For 12-26 months, volunteers take on the responsibility of training a puppy “for a career of helping others with disabilities, including those who are deaf or physically disabled, children who have autism, or veterans who have PTSD; or providing therapeutic assistance in a variety of professional settings,” said NEADS CEO Gerry DeRoche in a press release. Hubbard said she is laying the foundation of obedience training. For example, when she asks Hannah to take a ball and bring it back to her, that skill will later be used if the dog’s future owner drops something.

Hubbard recently demonstrated other important skills Hannah must master, including walking next to Hubbard’s knee; sitting when Hubbard stops; and going to the bathroom on command.

“She actually does it pretty well,” she said. When Hannah is outside of the home, she is a working dog, so she has to learn not to be distracted and run after other dogs or squirrels, for example.

NEADS teams evaluate the dogs throughout the entire training process and decide if they’ll “graduate.” After she leaves Hubbard’s home, Hannah will receive advanced training before placement, if she’s accepted as a service dog.

When asked how they’ll feel when they have to give Hannah back to NEADS, Hubbard said she and her family always knew there would be an endpoint to the arrangement.

“We do love her very, very much … it will be hard, for sure,” she said. “But it will be such a celebration for us … [for Hannah] to move on to be a service dog.”

Hubbard said she and her family are even thinking of training another NEADS puppy after Hannah leaves.

“It’s really a blessing to us … to be able to do this for someone else who really needs this,” she said.