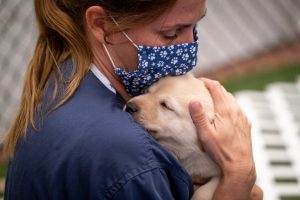 The coronavirus has no boundaries and has the potential to sideline the guide dog business that transforms the lives of those visually impaired and blind.

When the virus spread uncontrollably across the country in March, Sylmar-based Guide Dogs of America carefully moved forward with a plan to secure its future against the possibility of shutting down leaving a void of available service dogs.

“If we were to shut down, we’d see the effect of that in two years when there wouldn’t be enough of-age, highly trained guide dogs for people who are blind or visually impaired,” said Puppy Program Coordinator Stephanie Colman. “There wouldn’t be any breeding, no training.”

When the pandemic first brought the state to its knees and stay-at-home orders were enacted, Guide Dogs of America had a nursery full of puppies and several dogs due to give birth. It was impossible to shut down.

“We made changes to the campus environment to enact physical distancing and put several health and safety measures in place,” Colman said. “We also quickly figured out how to pivot from in-person puppy training classes where our volunteer puppy raisers learn how to teach the pups in their care the skills they’re expected to learn in puppyhood to Zoom-based learning. We also turned out puppy pick-up process into a curbside drive-thru affair, passing puppies through car windows like Happy Meals.”

A majority of the guide dogs are Labradors followed by a Labrador/golden retriever mix breed and German shepherds.

Labradors are mainly used because they are adaptable. They have a willingness to work for food and are flexible given the variety of people they live with over the years.

“They love the one they are with, so they handle that transition very well,” Colman said.

It takes about two years and $60,000, at no cost to the blind person, to raise and train the dogs and their future owners. The organization is primarily funded by International Association of Machinists local across the country.

When a dog is about eight weeks old it is given to a puppy raiser.

Raisers teach them to be obedient in a variety of environments and follow commands.

“And most importantly, they are going to get that dog out into the world and incorporate the dog into every facet of their life so the dog learns to be civilized, calm and competent in all the different possible settings it might find itself in later once it is a guide dog with a world view,” Colman said.

Puppy raisers keep the dogs for a little more than a year before they return to Sylmar for an additional four to six months of training with professionals who teach them highly complex guide dog skills.

During months of coronavirus restrictions, the organization is experiencing an uptick in puppy raisers, but there are still chances for anyone interested in pursuing the job. A call for volunteers to raise puppies is in full force during September, national guide dog month.

The coronavirus outbreak has also presented challenges for puppy raisers as well as those who eventually receive a dog. Raisers haven’t been able to get the dogs out as much.

Those outdoor training sessions are an important part of the puppies’ socialization and exposes them to many situations they may encounter later in life as working guide dogs.

Dogs are matched with their partners throughout the United States and Canada.

Before COVID-19, qualified clients stayed at the 7.5-acre Sylmar campus to learn about how to team up with their dogs during a three-week, in-residence program. Those vitally important classes have been cancelled.

And while post-coronavirus days can translate into more isolation for the dogs and their owners, one skill harnessed guide dogs don’t learn is how to keep socially distanced while working outside in their communities.

The ability to judge 6 feet for the dog is impossible and is especially challenging for their blind owner.

“Please if you see someone with a guide dog or anyone with a disability walking down the sidewalk, don’t make the decision for them that they are not going to get 6 feet between you,” said Lorri Bernson, a blind spokeswoman for Guide Dogs of America. “Please make the decision for them by taking yourself and moving around because many times I can hear someone coming down the sidewalk and I can tell the sound isn’t moving around me but it’s still coming at me. Unfortunately, I don’t have the ability to go off the curb (quickly) and take the direction on my own to get away to make that 6-foot barrier.”

Bernson, 58, is teamed up with her third guide dog, Captain, a happy-go-lucky 2-year-old yellow Labrador.

She has been visually impaired for 25 years due to complications with diabetes and admits to feeling isolated the past six months in her Encino home especially since she is working from home.

“(The isolation) is a little more elevated because of not being with others and I miss being out there with Captain,” Bernson said. “Many people with guide dogs will say their dog is the bridge to their social (interactions) and can be the magnet that draws a stranger into a conversation that otherwise might not have happened. Captain and I are a team; we go everywhere together. I trust him with both of our lives in his paws. I trust him more than myself because he has all of his senses and I know his role. He’s selected to be that dog, the dog that takes the challenge on and is going to succeed. In training, we give them many opportunities to show us that this isn’t their thing.”

Not all of the 150 puppies born and bred annually in Sylmar go on to be guide dogs. Guide dog work is complex and not the right job for every dog. About 60 are eventually matched with blind clients.

There are many reasons some dogs don’t make the elite job of being a guide dog including hip, eye, elbow and medical reasons. Those dogs that don’t make it may become other types of service dogs and could be paired up with a veteran with post traumatic syndrome or someone with autism for example.

If the dog is not eligible to be a service dog of any capacity, then the volunteer puppy raiser has a chance at adoption.

Pam English of Santa Clarita and her family are puppy raisers and on dog No. 33.

She and husband are area leaders for 46 puppy raisers in a cohesive group that stretches from east Simi Valley to Burbank and out to the Antelope Valley.

The Englishes were first introduced to guide dogs when their oldest daughter was earning a Brownie troop merit badge called “Walk a Mile in Another Girl’s Shoes” based on disabilities and learned about the Sylmar guide dog school. The discovery transpired when a children’s story hour at the local library had a few volunteers with guide dog puppies talking about puppy raising.

“They were putting out the plea for puppy raisers … so we went to a graduation and the girls in the troop had made treats for the dogs and we passed those out at graduation when the president did a plea for puppy raising and 16 little Brownies looked up at me and said, ‘Can we get a puppy?’” English said.

English acknowledges it can be hard for some puppy raisers to relinquish their puppy when it’s time for more formal guide dog training. But her family vowed they were in the puppy-raising business to help others, a commitment they never forgot or broke.

“Of course, the perk for us we get to work with animals and the dogs,” English said. “When you are committed to something … it starts to become a passion and we see that in a lot of our puppy raisers that they are very passionate about the puppy raising. It builds such a community. We know what our end goal is and that is to help someone who needs to have that dog for independence in their lives, so seeing that and meeting the graduates through the years that only solidifies and makes that even more meaningful of what we are doing.”