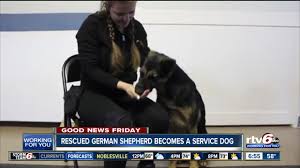 A local organization called “Medical Mutts” rescues animals with potential and trains them to become service dogs for people with medical conditions like diabetes.

That includes Sly, the German Shepherd.

Sly was rescued after being left in the cold, starving, and frostbit with another dog who passed away in those conditions.

Jennifer Cattet, the executive director of Medical Mutts, found Sly at Indianapolis Animal Care and Control and tested him.

“He was still very resilient. And super loving and playful and still loves people even after what humans did to him,” Clint Adams, a service dog trainer, said.

“Despite all of that, he’s just a really really good, sweet boy, really friendly, loves to learn, great in training, and we are so happy today that we are finally going to be able to place him as a service dog,” Cattet said of Sly.

Sly has become a service dog with a young woman named Paige, who suffers from a medical condition. She drove from Maine to Indiana this week to work with Medical Mutts before taking him home.