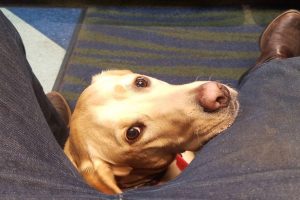 When Luke Hengen’s diabetes worsened in his early twenties, it stripped him of the outdoor activities where the country kid felt at home.

Countless wilderness adventures and years of hard-fought football games took a toll on his body, to the point where he could no longer sense when his blood sugar was too high or low. He felt like life was closing in on him and he wasn’t confident going off into nature alone or working in his job as a carpenter.

That changed when the former Victoria man got Logan, a Dog Guides Canada yellow lab who’s trained to alert him when his levels are off.

When Hengen was 20, he was hospitalized after passing out after a lengthy hike. He knew he needed to make a change for his own safety.

“Had that event happened when I was still out in the woods, there’d be no saving grace for myself,” he said. He eventually decided to go the service-dog route and about a year later, he was on a plane to Oakville, Ont. to get Logan.

A month later, the two went on their first nature outing, a deer scouting trip near Mount Arrowsmith. That’s where Hengen saw Logan dive into his service dog responsibilities, but it was also where the two became extensions of one another. Logan’s natural hunting and tracking instincts made it as if their thoughts were picking up where the other’s left off while they ventured through the woods.

“The personality was an exact match for myself,” Hengen said. “That first summer spent with Logan was some of the most fun I think I’ve ever had.”

The connection is indescribable, Hengen says, and only by seeing the tandem in seamless action can one understand. They’re never far apart, whether that’s on the job site, as Logan’s fetching dropped tools and climbing ladders behind Hengen, or just relaxing after a long day.

“He’s sitting there on the couch snoring just as loud as I am, it’s really a perfect pairing,” he said.

But when Logan senses his owner’s levels are off, he’s on him like a “bad habit,” pestering Hengen and nipping at his heels until he corrects his blood sugar.

“The school trains him to raise a paw and just pat you, but Logan was never really good with that one so he just jumps full on me, springs right for the chest, letting me know ‘you’re dyin’ son.’”

Hengen used to worry about having a low-blood-sugar episode while working several stories up. But having Logan by his side and monitoring his levels, those job site worries that dogged him faded away.

“He was just flying, running across ladders, across joists, he’s a better carpenter than most I see on sites,” he said.